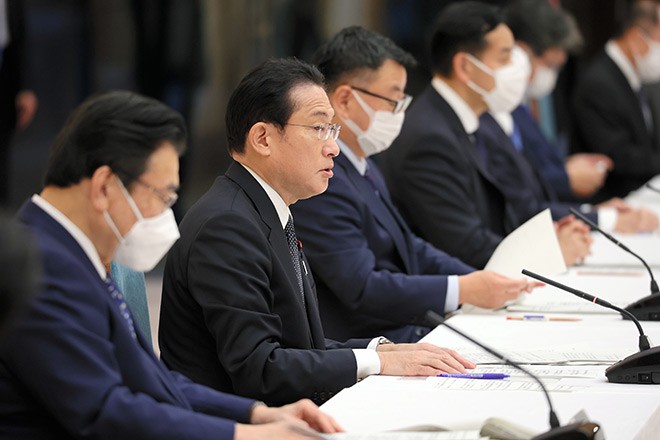 A government task force accepted the requests from the three prefectures of Okinawa, Hiroshima and Yamaguchi to implement pre-emergency measures until the end of January to stem their recent surges in new infections, particularly with the Omicron variant.

Pointing to the speed at which the Omicron variant was spreading, Kishida said at the task force meeting that two measures will be strengthened to limit damage from the rising health crisis.

One was to give the prefectural governors greater leeway to ask bars and restaurants to shorten their business hours or not serve alcohol to reduce the risk of infections.

The other measure is requiring the three prefectural governments to disclose their progress in securing adequate medical care and public health services to local residents.

The government’s approval of the COVID-19 measures is the first since the state of emergency was lifted in September. It is also the first since the central government revised its guidelines on dealing with COVID-19 to place greater emphasis on ensuring that no undue stress is placed on the medical care system.

Under the five-level guidelines, pre-emergency measures are to be considered when a prefecture is at either level 2 or 3.

All three prefectures were at level 2, which means the local governments should be more vigilant against the spread of the novel coronavirus.

Although the pre-emergency measures allow governors to request that bars and restaurants shorten business hours or not serve alcohol, the central government has relaxed other restrictions.

For example, establishments certified by a third party as having implemented infection-prevention measures may be allowed to maintain their business hours and sell alcohol.

Customers who can certify they have received COVID-19 vaccines or tested negative would be allowed to wine and dine in parties of five or more.

Those eased measures, however, were premised on the Delta variant, and government officials were moving toward stronger steps to deal with the Omicron strain.

At the Jan. 7 meeting of the government panel of experts, Daishiro Yamagiwa, the state minister in charge of dealing with COVID-19, indicated that prefectural governors would be given the option of also asking even certified establishments to not serve alcohol.

He added that eased restrictions on party sizes could also be suspended in areas where infections suddenly surge.

The three prefectures will take different approaches to local bars and restaurants.

Hiroshima and Yamaguchi prefectures will ask all establishments in the designated localities to not serve alcohol and to close their doors at 8 p.m.

However, Okinawa Prefecture will allow certified establishments to serve alcohol until 8 p.m. and remain open until 9 p.m.

A new measure was also included to allow all members of a group to wine and dine at bars and restaurants if they show negative test results for COVID-19.

The measure was added because experts pointed out the higher risk of being infected with the Omicron variant, even among those who have been vaccinated.

The pre-emergency measures will be in place from Jan. 9 until 31, but anti-virus moves have already been made.

For example, a number of municipalities in Yamaguchi and Hiroshima prefectures postponed Coming-of-Age Day ceremonies originally planned for either Jan. 9 or 10.

Many of the municipalities are now considering holding the event during the Golden Week of national holidays from late April until early May.