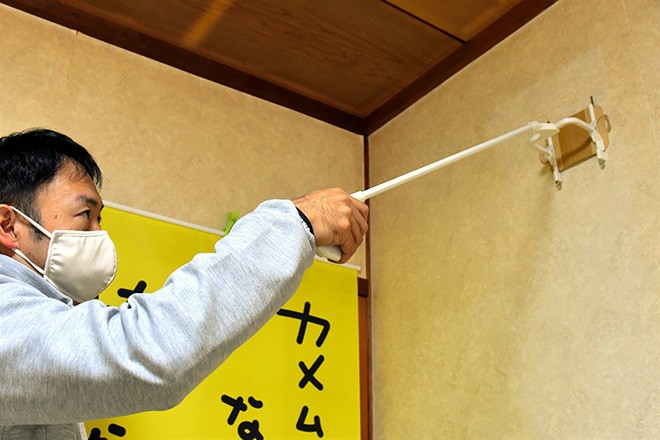 A stink bug is caught with an adhesive sheet attached to the end of Pacrin’s arm. (Orina Sakakibara)

IZUMO, Shimane Prefecture--Takuyuki Hamamura spent years trying to invent a snappy gizmo to harmlessly catch stink bugs as a favor to his wife who couldn’t stand handling them when they invaded the couple’s rural home here in autumn.

Hamamura, 47, recalled he used to return home to find paper cups his wife had placed everywhere to trap the insects, which emit a foul smell when they are threatened.

He hit upon a version of lazy tongs, spent eight years working in his spare time and completed the device last spring with help from his father, Masao.

Kamemushi-san Hokakuki (stink-bug catcher) Pacrin went on sale in August. As word of his handy tool spread after it featured in a TV news show, Hamamura found himself inundated with orders from across Japan.

Hamamura said he was driven by a sense of mission throughout the endeavor.

“I thought there must be many people out there who are troubled by stink bugs,” said Hamamura, a senior managing director of a lumber company called Hamamura Mokuzai. “I’m happy if my humble tool can help people like my wife.”

Hamamura, whose home stands in a mountainous area, felt great empathy for his wife, who grew up in another part of Japan and was not used to insects of any kind. Her solution was simply to trap stink bugs with paper cups and leave them for her husband to sort out.

Hamamura would eliminate the insects by using sheets of tissue or adhesive tapes, but began looking for a better way to make his spouse’s life easier.

But creating an anti-bug tool fell outside his area of expertise. He sought inspiration by roaming the shelves at a local 100-yen store, so named because almost all items cost the equivalent of 88 cents, plus 10 percent consumption tax.

Masao, 72, president of Hamamura Mokuzai, initially thought his son’s plan was daft but gradually started to take the idea seriously.

The beauty of the device is that the user does not handle stink bugs at any point.

An adhesive sheet is placed in the arm of the device to trap the insects. The user operates a lever to fold the adhesive sheet so it can be secured and thrown in the trash.

Rendered immobile, the insect does not release an offensive smell. The arm is designed to ensure the bug is not crushed during any part of the process.

The bug catcher costs 3,300 yen, including tax, and a set of eight adhesive sheets is available for 440 yen. Details are available on the Japanese-language website at (https://pacrin.official.ec/).