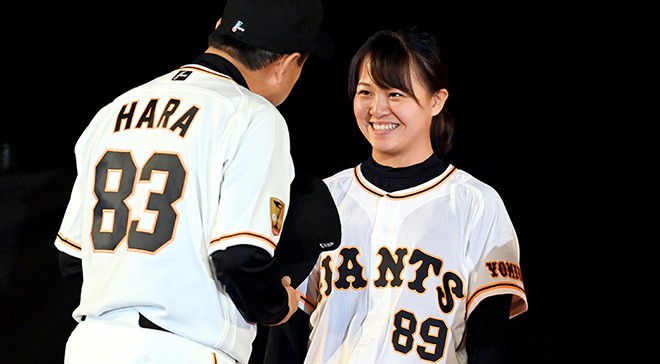 Ayuri Shimano with Tatsunori Hara, manager of the Yomiuri Giants, at the Ryogoku Kokugikan in Tokyo on Dec. 8 (Photo by Takuya Isayama)

Throughout her young career as a standout pitcher, Ayuri Shimano has sought to take giant steps for female baseball players in Japan.

Now, she’ll become a Giant herself.

Shimano, 17, has been selected as one of the first members of an all-female amateur club being started by the Yomiuri Giants professional baseball team.

“I appreciate the team taking a step in a new direction,” she said. “This is welcome news for women’s baseball.”

The Giants announced on Dec. 8 that the women’s team will start playing in 2023 and named its first four members, including Shimano.

It was the third among Nippon Professional Baseball’s 12 teams to set up a female club after the Seibu Lions and the Hanshin Tigers.

Her school beat Kochi Chuo High School 4-0 at the final on Aug. 23, which was held at Hanshin Koshien Stadium in Nishinomiya, Hyogo Prefecture, for the first time in history.

Shimano, who hails from Osaka, started playing baseball during her elementary school days following her two elder brothers, who both competed in the prestigious National High School Baseball Championship, which is held annually at Koshien.

While boys can dream of competing in Koshien, NPB and even Major League Baseball, few junior and senior high schools in Japan have baseball clubs for female students.

As a junior high school student, Shimano became her baseball club’s ace pitcher by outperforming her male teammates and helped her team to win a national competition.

She was flooded with requests for interviews and appearances on TV shows. Although she does not like speaking in public, she accepted as many offers as possible between her classes in the hope of “bringing women’s baseball to the mainstream.”

Shimano, who will graduate from high school in March, was determined to devote herself to women’s baseball when she considered what career to seek.

“When I was a sixth-grader in elementary school, I was not able to see any future in baseball. I wondered whether I should switch to softball,” she said. “I want to help create a path where girls in similar situations can continue playing baseball just like boys.”

Her hope is helping the sport’s development by showing off her skills for the Giants, one of NPB’s most dominant teams.

“I will put on my uniform while bearing the huge responsibility I should fulfill for women’s baseball,” said Shimano.