Kusatsu named most popular onsen resort for the 1st time 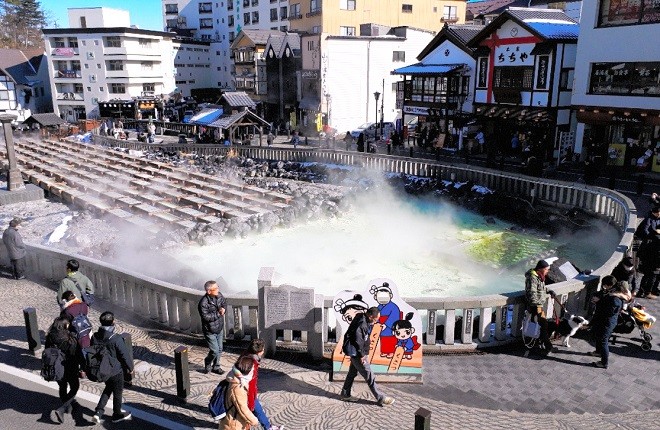 MAEBASHI--The Kusatsu onsen here was the surprise winner in an annual ranking of the best hot spring resorts in Japan, ousting Hakone from the top spot, a position it had held for 15 years since surveys by the Jalan Research Center started.

The center, which specializes in tourism and leisure, surveyed members of the Jalan Net travel website from Aug. 23 to 31. Of them, 13,961 provided valid responses.

Respondents were asked to pick which resort they would like to visit again from 327 sites nationwide. Up to five multiple answers were permitted.

“The ambience of the town” was cited by 74.7 percent, while 59.2 percent said “efficacy and spring quality.”

By age group, Hakone was ranked first among respondents in their 20s and 30s. But Kusatsu was the most popular among those in their 40s through 60s.

According to the research center, an announcement by Gunma University that spring water from Kusatsu proved to be effective in inactivating the novel coronavirus contributed to its leap to the top spot.

The resort was also rated highly for its efforts to create an environment to prevent the spread of the novel coronavirus through the installation of “Tearai no Yu” stations in the center of the area for visitors to wash their hands with hot spring water.

The research center said families and senior citizens clearly felt at ease staying at Kusatsu, citing the opening of a lodging facility with guest rooms equipped with an outdoor spa and other benefits that was introduced for visitors from April 2020.

The survey also found that Noboribetsu in Hokkaido ranked third, followed by Dogo in Ehime Prefecture in fourth place and Beppu in Oita Prefecture in fifth place.