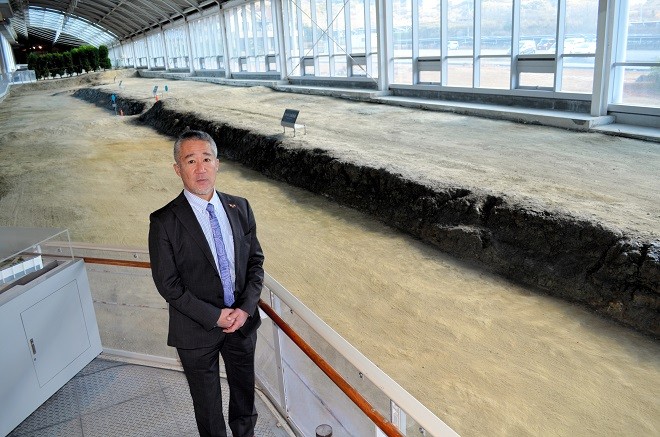 Masayuki Komeyama poses in front of an outcrop of the Nojima geological fault, preserved under a roof just as it looked after it ruptured the surface during the 1995 Great Hanshin Earthquake, in Awaji, Hyogo Prefecture, on Jan. 5. (Naoyuki Mori)

AWAJI, Hyogo Prefecture--After nearly a quarter-century, a museum here dedicated to passing down the lessons from the Great Hanshin Earthquake is struggling with falling visitor numbers, as the coronavirus pandemic has dealt the latest blow.

Masayuki Komeyama, 55, the general manager of the Hokudan Earthquake Memorial Park in Awaji, Hyogo Prefecture, has been working to pass on his own and other survivors’ accounts of the quake.

The massive tremor, which occurred on the morning of Jan. 17, 1995, devastated Kobe and the surrounding areas and killed more than 6,400 people.

The park hosts the Nojima Fault Preservation Museum, which shows part of the eponymous active geological fault that ruptured the surface during the quake. The museum was visited, at the outset, by crowds of tourists and students on school excursions, partly because of its novelty.

Some 2.82 million people visited the museum in fiscal 1998, the initial year of its operation. An earthquake simulation hall, which allows visitors to relive the shocks of real quakes, and a restaurant have also opened in the park, partly in the hopes they would help revitalize the local community.

Visitor numbers, however, have continued falling steadily in the second and subsequent years until they dropped to only about 123,000 in fiscal 2019. The COVID-19 pandemic further halved that number to some 67,000 in fiscal 2020, only about one-42nd the corresponding figure for the initial fiscal year.

As the facility could not hope to attract the repeat visitors that an amusement park would, a drop in visitor numbers was inevitable to a certain event.

Even so, the drop of that scale has seriously affected the management of the museum.

Komeyama is president of the memorial park’s operator, a joint public-private venture, with part of the stakes held by the city government of Awaji. The company relies on admission fees to cover most of its expenses.

Its initial workforce of 120, including security guards, has been reduced to only 10, and the admission fees have also been raised.

“We have cut expenditures to ride it out,” Komeyama said. “Further cuts would hamper our operations.”

The Disaster Reduction and Human Renovation Institution (DRI) in Kobe’s Chuo Ward, which has played a central role in disaster management education, also saw a sharp drop of nearly 90 percent in visitor numbers to about 64,000 in fiscal 2020 from pre-pandemic figures of the previous fiscal year.

The number of lectures given by living witnesses to the Great Hanshin quake also dropped to only about 20 percent of the figures for fiscal 2019.

“That is largely due to the drop in the number of elementary school and junior high school students visiting in groups,” a DRI official said.

The number of visitors is expected to remain as low as 80,000 or so in the current fiscal year, which ends in March, partly because the institution was closed for a certain period under a COVID-19 state of emergency.

The DRI is operated by a public interest incorporated foundation with Hyogo Prefecture, whose loss in admission revenue for fiscal 2020 was compensated for by the prefectural government.

“If things were to remain as what they are, that could make it difficult for us to cope properly with the wear and tear of our equipment and other problems,” the official said in expressing concerns about the future.

The Nigawa-Yurino-cho Landslide Museum in Nishinomiya, Hyogo Prefecture, also saw a year-on-year drop of nearly 60 percent in the number of group visitors with reservations in fiscal 2020.

The facility, operated by the prefectural government, was built in the eponymous district to pass down lessons of a large-scale landslide, which was triggered there by the quake and took 34 lives. The museum was closed during the pandemic from April through May in 2020.

Gekidan Jiyujinkai, a theatrical troupe that has put on plays to pass down accounts of the Great Hanshin quake, faced a sharp drop in revenue from suspended public performances.

The troupe, based in Kobe’s Tarumi Ward, has relied on central government subsidies and loans to get through the crisis, but its very existence could be threatened, troupe officials said.

Jiyujinkai was only 1 year old when the Great Hanshin Earthquake struck, destroying the troupe’s office-cum-rehearsal room in Kobe’s Higashi-Nada Ward.

It adapted “The Great Hanshin Earthquake for Class 3, sixth grade,” a book-format collection of compositions written by schoolchildren, into a script for a play, which it has staged at elementary schools, junior high schools and other venues around Japan since December 1995.

The young authors were from Nishinomiya’s municipal Hinokuchi Elementary School, which lost five of its pupils to the quake.

In staging the play about 700 times, the troupe has used various devices, such as showing footage from the time before the play begins, so those born after the quake can understand the message better.

Jiyujinkai, however, stopped putting on “Class 3, sixth grade” sometime around 2014.

“With the passage of time, more school officials began to request cheerful plays,” said Moriko Mori, 66, the head of the troupe.

Jiyujinkai’s members have said every year that they hoped to be able to perform in “Class 3, sixth grade.”

“I only hope we can get over the pandemic and put on the play again on the landmark 30th anniversary of the quake,” Mori said, all the while admitting that the future remains uncertain for her troupe.