NHK apologizes for false label of ‘paid protester’ against Olympics 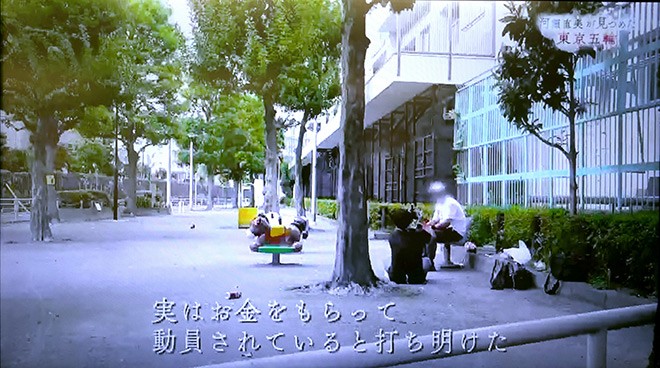 A scene from a documentary produced by Japan Broadcasting Corp. (NHK), titled, “The Tokyo Olympics through the eyes of Naomi Kawase.” The chyron explains that a man interviewed confesses that he has been paid to participate in anti-Olympic demonstrations. (Hiroki Ito)

Japan Broadcasting Corp. (NHK) on Jan. 9 admitted that it falsely labeled a man as a “paid protester” against the Tokyo Olympics, and denied the mistake was intentional.

NHK aired a two-minute segment on the BS1 channel on the evening of Jan. 9, apologizing to “all related people in the film production business and all viewers.”

The false information appeared in a documentary produced by NHK’s Osaka bureau titled “The Tokyo Olympics through the eyes of Naomi Kawase.” It was aired on Dec. 26 on the BS1 channel.

The documentary followed a filmmaker who, at the request of Kawase, an award-winning Cannes director, interviewed citizens and others who were opposed to the holding of the Tokyo Olympics last year.

In an interview with one anonymous man, the chyron said he “has participated in anti-Olympics demonstrations” and “confesses he has been paid to do so.”

After the documentary was aired, multiple queries flooded NHK about the “paid protester.”

NHK said staff members interviewed the man again in January. They found out that he told the crew when he was filmed initially that he “had participated in multiple demonstrations in the past and had received money.” Those protests were not about the Olympics.

He also said that he “is thinking about participating in anti-Olympic demonstrations in the future.”

These statements differed from that in the chyron said, NHK said.

“There was inaccurate content in the subtitles,” NHK’s Osaka Bureau said on Jan. 9.

NHK said a director in charge of the documentary wrote the chyron based on supplementary materials gathered independently.

But proper fact-checking on such information was not conducted, NHK said.

The broadcaster said there was no intention to fabricate information to sway public opinion in favor of the Olympics.

“It was the result of a lack of information gathering and misapprehension among the people in charge of production,” NHK said. “There was a lack of communication among those in charge and between them and those being interviewed.”

Although multiple test screenings for related people were held before the documentary aired, no adjustments were made, NHK said.

“All of the processes of information gathering and production are NHK’s responsibility,” NHK said. “Kawase and others are not responsible.”

Kawase has been appointed to direct the official film of the Tokyo Games. The film, sponsored by the International Olympic Committee and the Tokyo Games’ organizing committee, is scheduled to be released in June this year.