Pre-implantation tests of fertilized eggs get green light from April 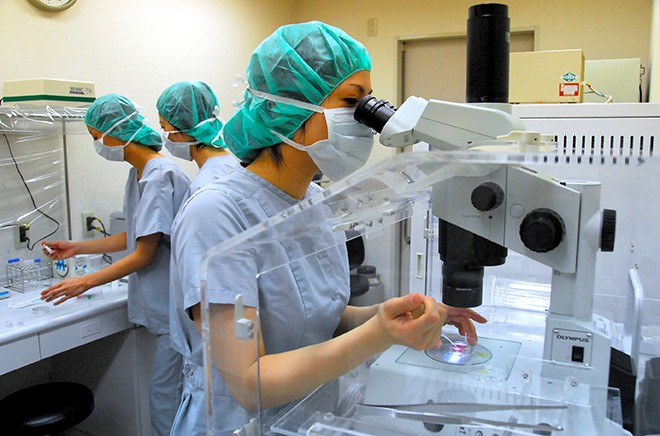 A specialist monitors the condition of an egg fertilized by in-vitro fertilization at a medical facility in Osaka. (Asahi Shimbun file photo)

Seeking to improve success in fertility treatments, the Japan Society of Obstetrics and Gynecology will now support screening of chromosomes of fertilized eggs created through in-vitro fertilization (IVF).

The JSOG announced the change of stance at a news conference on Jan. 9. Eligibility will be limited to women who have had at least two miscarriages and other conditions.

Under the revised guidelines from April, the pre-implantation test to check for chromosome abnormalities in fertilized eggs can be conducted in three cases: women who have suffered two miscarriages or more; women who could not get pregnant despite receiving IVF therapy twice or more; and married couples who have a chromosome abnormality on either the male or female side.

A fertilized egg containing abnormal chromosomes may result in the egg becoming dislodged in the uterus or cause a miscarriage in the early stages of pregnancy, even if the egg transfer to the uterus was performed in textbook fashion, according to experts.

The genetic screening will be held at medical facilities certified by the JSOG to ensure the quality of the testing.

The society will also call on those facilities to offer clients counseling on the possibilities of hereditary diseases, access to health care and assistance and other matters related to genetic defects prior to and after the screening.

But it has passed on covering genetic screenings, citing the ongoing deliberation of the question at the Central Social Insurance Medical Council, an advisory panel to the health ministry over the national health insurance program and related matters.

Tadashi Kimura, chairman of the JSOG, said at the news conference that it will be “realistic” to apply for ministry approval for the genetic testing as part of advanced medical services.

Although advanced medical services are not currently covered by the national health insurance program, these services can be offered to patients while combined with therapy that is under the coverage.

The JSOG also revised its position on pre-implantation genetic diagnosis of embryos, the testing of pre-implantation stage embryos for genetic defects, as a procedure to prevent a severe hereditary disease from being passed down.

Under the existing guidelines, the diagnosis is targeted at married couples whose potential offspring are at risk of a severe genetic disease requiring the use of a breathing machine by the time they reach adulthood.

But from April, the pre-implantation genetic diagnosis will be applicable to other severe genetic disorders that may emerge after reaching adulthood as well.

Such a diagnosis will be given on the condition that no effective treatment exists at this stage, according to the new guidelines.