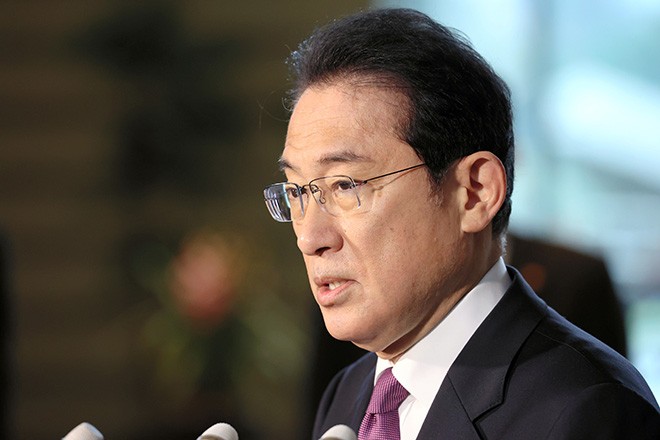 Prime Minister Fumio Kishida meets with reporters on Jan. 11 to explain new measures to deal with the Omicron variant of the novel coronavirus. (Koichi Ueda)

Prime Minister Fumio Kishida said Jan. 11 that Japan’s entry ban on foreigners would continue until the end of February.

The tougher border control measures started on Nov. 30 when the first Omicron variant case was confirmed in Japan. The measures were initially planned to be in place for about a month, but Kishida wanted to make a decision after observing COVID-19 infection trends over the three-day weekend that ended Jan. 10.

“While implementing measures needed from a humanitarian perspective as well as from the standpoint of national interest, we will maintain for the time being the current framework for border control until the end of February,” Kishida told reporters on Jan. 11.

Returning Japanese nationals will continue to be asked to self-isolate for 14 days, and those arriving from nations with a prevalence of Omicron cases are still requested to self-quarantine at designated facilities for periods ranging from three to 10 days.

Kishida also said COVID-19 vaccinations will be provided to children under 12 for the first time.

To accelerate the booster shot program for senior citizens, the government will ask the Self-Defense Forces to reopen mass vaccination centers in Tokyo and Osaka.

The centers were closed in November after a larger proportion of the population received their jabs.

Kishida said booster shots for senior citizens would be moved up by using the 9 million or so unused vaccine doses.

Prefectural governments will be urged to set up their own vaccination centers to accommodate large numbers.

Because Omicron variant infections have also been found in children, Kishida said steps would be taken to allow for shots to children under 12 after going through the necessary procedures concerning pharmaceuticals.

Kishida also urged schools to allow for remote learning if classes are canceled because of infections. He said schools should consider providing additional tests for students who may miss a scheduled entrance exam because they or someone in their family became infected.

In addition, schools should show more flexibility, such as letting new students enroll later than the normal April start of the school year, Kishida said.

The prime minister indicated that the standards regarding the hospitalization and release of patients with the Omicron variant will be reviewed after taking into consideration what is being done abroad and based on accumulated scientific knowledge.

On Jan. 10, Kishida met with experts dealing with the health crisis, including Shigeru Omi, who chairs the government panel of experts.

The experts pointed out that while the Omicron variant was more contagious than other strains, it could also carry a lower risk of patients developing serious symptoms.

But others said if the Omicron variant infects more senior citizens at a faster pace, the ratio of those patients with serious symptoms would likely increase.

The experts said there was no need to be excessively fearful, calling for calm instructions to the public to avoid confined spaces with poor ventilation, crowded places with many people nearby and close-contact settings such as close-range conversation.