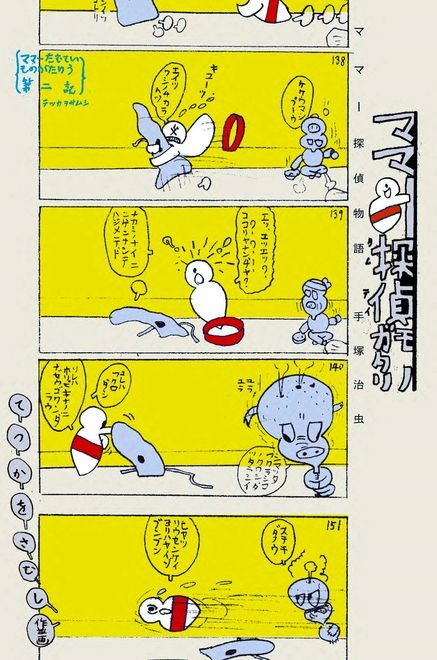 “The Story of the Detective Mamar” to be published by 888books ((c) Tezuka Productions Co.)

A 700-page anthology of Osamu Tezuka’s manga works created before he turned professional will be published in March, including a series that marked the beginning for the “god of manga.”

Tezuka (1928-1989) was 17 years old when he started his professional career as a manga artist in 1946, with “Mah-chan’s Diary,” a four-frame comic strip serialized in a newspaper.

The new anthology will contain comic strips that he drew when he was between 10 and 15 years old, such as the title work “The Story of the Detective Mamar.”

“It is Tezuka’s starting point. It was drawn when he was young, but it features a condensed story and is worth reading,” said editor Takayuki Hamada who led the anthology project.

Although parts of Tezuka’s early works have appeared in books and at exhibitions, this will be the first time they are published collectively in a book form, according to Hamada.

The anthology will contain some of Tezuka’s pieces co-created with his younger brother and younger sister. His scribbles and doodles left on the original pages will be published as they are.

Tezuka worked on “The Story of the Detective Mamar” for several years since he was 13 years old.

Even after Tezuka became a professional, Mamar, a mysterious one-eyed creature, appeared out of context, much like Hyotan-Tsugi, in many titles, such as “Black Jack” and “The Three-Eyed One.”

In “Rainbow Parakeet,” the creature appeared as Honne and played a key role.

Hamada has been involved in projects to reprint Tezuka’s works.

He saw the original manuscripts of the early teenager kept by Tezuka Productions Co., which were drawn on simple paper with pencils and other utensils. The editor was particularly impressed by Tezuka’s carefully crafted illustrations, distinct portrayals of characters, crowd scenes, sense of speed, use of perspective and cinematic techniques.

“We can see him as a budding creator in these comics, which also show how he experiments with his techniques through trial and error,” Hamada said.

Known as a perfectionist, Tezuka made considerable modifications to his works when they were compiled into independent volumes after being published in comic anthologies.

For that reason, the artist may have felt conflicted about having his amateur works published because he wouldn’t have expected them to be seen by the world, according to Hamada.

But the editor felt compelled to publish them in print form because some parts of the original paper pages have deteriorated.

He also found it meaningful to publish them for research purposes, and obtained permission from the artist’s family and Tezuka Productions.

“These manga are free-spirited and fun, possibly created for his family and friends. They are naive but share something in common with Tezuka’s later works,” said Hajime Tanaka, who is in charge of the archive at Tezuka Productions.

“The Story of the Detective Mamar” will be published by 888books (pronounced as “hachimitsu books”).

Orders are accepted at the official website. Priced at 24,200 yen ($210), each copy is scheduled to be delivered in early March.

The anthology will also be available at bookstores after mid-March.

“I feel frustrated for having to set a high price because it cost a lot of money to add corrections and make other adjustments to re-create the original state,” Hamada said. “It’s a miracle for this work to have survived. I hope readers read it without skipping a single frame.”