151 wartime photos of Angkor ruins found at university in Kyoto 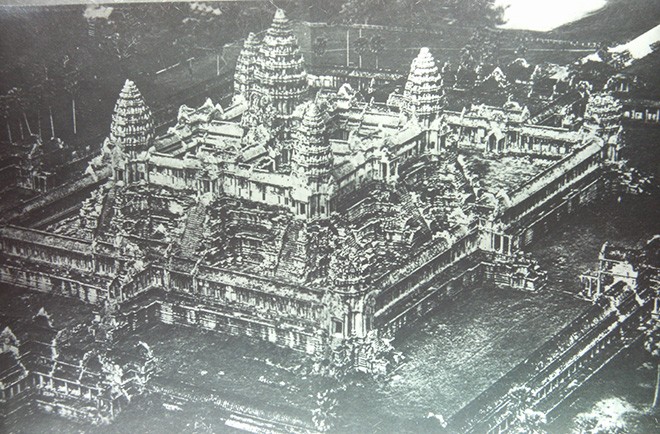 An aerial view of the Angkor Wat temple complex, which was listed as a UNESCO World Heritage site in 1992 (Provided by the Hanazono University library)

KYOTO--A box that sat for decades in a university library storeroom here yielded a trove of photos presumed to have been taken at Cambodia’s Angkor archaeological complex, a UNESCO World Heritage site, during World War II.

A librarian at Hanazono University found the box on a shelf of unsorted materials in June. It contained 151 images printed on paper, each measuring 12 by 15 centimeters.

Angkor, located outside Siem Reap, about 300 kilometers northwest of Phnom Penh, was the capital of the Khmer Empire, which flourished from the ninth to 15th centuries.

The collection includes an overall aerial image of Angkor Wat, the crowning glory of the temple ruins from the early 12th century, and photos of gigantic towers with carved faces at the central Bayon temple at the Angkor Thom ruins of the royal capital.

Notes written in pencil on the backs of photos show locations, objects and other information.

The photos were likely shot by an artworks expedition organized by the Shinshu Otani-ha branch of Jodo Shinshu (Shin Buddhism), which is based at Kyoto’s Higashi Honganji temple.

Koji Osawa, a specialist at the Agency for Cultural Affairs’ Religious Affairs Division, said the discovery of these photos is significant.

“The records are evidence of how a Japanese Buddhist sect ventured into the rest of Asia during the war,” said Osawa, who is well-versed in the activities of Buddhist sects in Southeast Asia.

According to Osawa, Shinshu Otani-ha dispatched the Higashi Honganji southern artworks expedition to Angkor from 1942 through 1943 to pursue academic studies in and around Southeast Asia in line with national policy.

The expedition comprised 12 members, including painters, photographers and priests. They are believed to have brought back 30 artwork reproductions, a multitude of rubbings and 1,000 photos.

The photos are attributed to Naotaro Nomura, a member of the photography team, in a note on the box.

It was believed that the expedition donated its records to academics and those specializing in fine art.

Where the materials ended up remained a matter of conjecture until 2018, when 52 glass plates, likely photographed by the team, were discovered by Masaharu Asada, a Tokyo-based collector.

Shusuke Inagaki, head of Hanazono University’s library division, enlisted Asada’s help in comparing the photos on the glass plates with those printed on paper. At least 43 images were identical.

He said photos printed from the glass plates likely came into the university’s possession in 1958.

Still, Inagaki said it remains unknown why Shinshu Otani-ha’s records were stored at Hanazono University, which is operated by the Myoshinji branch of the Rinzai sect of Zen Buddhism, a different denomination.