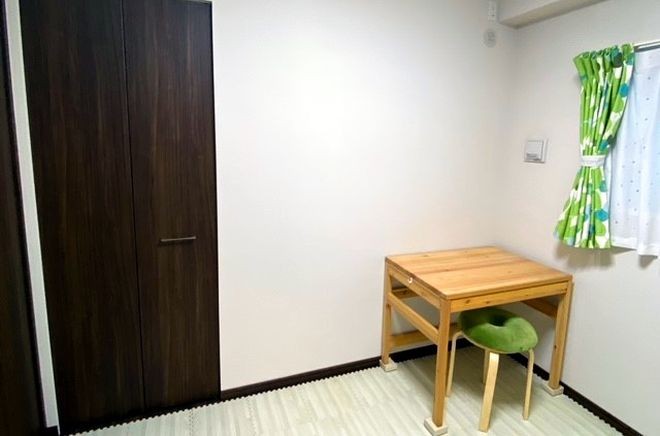 NAGOYA--A couple living in the Tokai region has prepared a room in their home for a prospective foster child.

For the child's bedroom, they have chosen a room in their three-bedroom apartment that they have to pass through the living room to enter. That way, they can see their foster child more often. Planning for the future, they also bought a new study desk.

However, the bedroom has remained vacant for two years now, as the male same-sex couple desperately want to raise a child but are finding the process difficult.

It is believed that they are one of only a few male same-sex couples who have been approved to be foster parents in Japan.

The prospective foster parents are a company employee in his 30s and his male partner, who is also in his 30s.

The company employee has always loved children. He hoped to raise a child of his own and meeting his current partner in autumn in 2016 didn’t change that desire.

He researched becoming a parent. He found out that he could become one through international surrogacy but the process is expensive.

However, he didn’t know any relatives or acquaintances willing to put up a child for adoption.

The news gave him hope that he, too, could have a child.

The fostering system permits foster parents to raise children who cannot live in their own homes because they have no parents or guardians, or because they were abused, among other reasons. Foster parents are approved by child guidance centers to raise those children until they become independent or can live with their birth parents again.

The company employee received training to become a foster parent. He and his partner were approved to become foster parents by their local authority in February 2020.

Initially they asked their local children guidance center to let them foster a young child whom they can look after for a long period of time. However, their wish wasn’t granted and in September last year, they told the center that they would be willing to foster a child of any age.

He and his partner want their child to take up activities outside school if so desired. To enable this, they set aside money every month in a special fund, which now totals more than 1 million yen ($8,700).

However, they still are waiting to be contacted by the child guidance center, hoping to hear good news.

The government revised the child welfare law in 2016 to promote raising children who cannot live with their natural parents in an “environment similar to home,” rather than in institutions such as children’s homes. Under this revision, the government is seeking to promote foster care.

A child guidance center decides whether a particular child should be raised in an institution such as a children’s home or in foster care. For a child to be fostered, the child’s natural parents first need to agree that their child will go into foster care.

An official from the local authority responsible for the area where the company employee and his partner reside says that many natural parents want their children to be raised by foster parents who have experience raising children or in institutions.

The official explained why the company employee and his partner have been unable to foster a child so far.

“In many cases, we had to conclude that asking them to foster a child was difficult after taking into consideration if the birth parents have an understanding about sexual diversity," the official said.

The official added, “We would like to ask them whether they want to foster a child if we think one matches them, considering his or her interests.”

According to the Ministry of Health, Labor and Welfare, in Australia, 90 percent of children needing parents or guardians are fostered, with the figure being 80 percent in the United States.

“In foreign countries, even if opinions were divided initially, same-sex couples eventually came to be allowed to foster children after debate on the subject," he adds. "In Japan, there is not even a debate on this issue."

Yasuhiko Watanabe, professor of family law at Kyoto Sangyo University, says that research conducted overseas has found that there is no difference in the well-being of children who are raised by heterosexual couples or same-sex couples.

"Whether the special adoption arrangement should be restricted to legally married couples is also relevant to heterosexual couples in a common-law marriage," Watanabe said. "Addressing issues facing same-sex couples could lead to a society in which more people are comfortable living in it.”