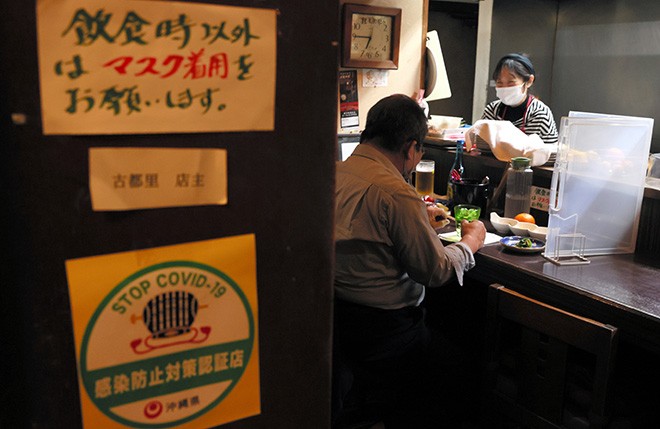 A restaurant in Naha on Jan. 9 (Minako Yoshimoto)

Still, the number was more than six times that of the previous Tuesday, Jan. 4, when 151 new cases were confirmed.

The weekly average of new daily cases through Jan. 11 came to 890.4, or about 10 times more than that of the previous week when the figure stood at 90.7, metropolitan government officials said.

Osaka prefectural authorities on Jan. 11 confirmed 613 new cases, of which 155 people were diagnosed with the Omicron variant. All but one those individuals had no history of traveling overseas, officials said.

In Okinawa Prefecture, officials reported 775 new cases of COVID-19 among islanders on Jan. 11. The figure excluded those who have some connection to U.S. military bases in the southernmost prefecture.

Separately, the U.S. military reported 386 new cases at its bases on Jan. 11, according to prefectural officials. The figure was the third-highest daily count reported by U.S. bases to date. The facilities involved were not specified.

Okinawa posted more than 1,000 new cases daily for the three consecutive days until Jan. 9, excluding those involving U.S. bases. The figure for Jan. 10 dropped to 779.

Officials said they believe the decrease was due to a three-day weekend when health care organizations were closed and did not mean the infection surge had slowed.

The Ground Self-Defense Force on Jan. 11 announced it will dispatch 10 nurses and medical workers to the prefectural Hokubu Hospital in Nago and Chubu Hospital in Uruma following a request from Okinawa Governor Denny Tamaki.