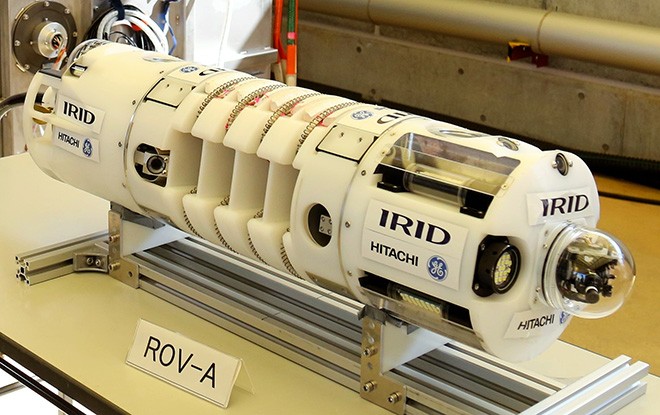 The first robot to be sent into the No. 1 reactor at the Fukushima No. 1 nuclear power plant will attach the four rings in the middle to the interior wall. (Provided by IRID and Hitachi-GE Nuclear Energy)

More than a decade after the Fukushima nuclear accident, officials of Tokyo Electric Power Co., the plant operator, still have no idea about the condition of the melted nuclear fuel in the No. 1 reactor.

They hope to get a clearer picture through a study beginning Jan. 12 utilizing six submersible robots of what has to be dealt with and the sediment in trying to remove the highly radioactive material.

“By learning about the details of the sediment, we want to obtain information that will help us decide what equipment and procedures will be needed to remove the melted fuel,” a TEPCO official said.

The robots were jointly developed by Hitachi-GE Nuclear Energy Ltd. and the International Research Institute for Nuclear Decommissioning (IRID).

The melting of the nuclear fuel in the No. 1 reactor at the Fukushima No. 1 nuclear power plant was the most severe of the three reactors where meltdowns occurred following the 2011 Great East Japan Earthquake and tsunami.

Much of the so-called nuclear debris is believed to have melted through the bottom of the pressure vessel and has likely accumulated in the basement of the reactor building.

In 2017, a camera was inserted into the water collected in the containment vessel of the No. 1 reactor to check on the condition of the interior. However, no confirmation could be made of the debris because of the large amount of what appeared to be sand that covered the melted fuel.

The six submersible robots will have different functions and be deployed in a designated order to photograph and measure the depth of the sediment and to determine if melted fuel lies under it.

The first robot will install four rings on the interior wall of the containment vessel using magnets. Subsequent robots will navigate through the rings to avoid entangling the trailing cables transmitting electricity and signals.

The robots have been dubbed "IRIDolphin" because they will swim through the rings much like dolphins during shows at aquariums.

The second robot to enter the reactor will have a camera to allow for visual inspection of the interior. Subsequent robots will measure the depth of the accumulated sediment, detect the debris by picking up the radioactive materials found in the fuel, collect small samples of the sediment and measure the distribution of the sediment on the floor.

The robot with the camera will again be sent into the reactor as the final robot to try to navigate to a position right below the pressure vessel where the fuel melted through to get as close as possible to the melted fuel. Those involved in the project admit that this robot may have to be left behind if it becomes stuck with whatever is in that area.

The study will continue until August.

The most progress in confirming the debris has occurred in the No. 2 reactor and plans call for removing small amounts from the containment vessel before the year-end.