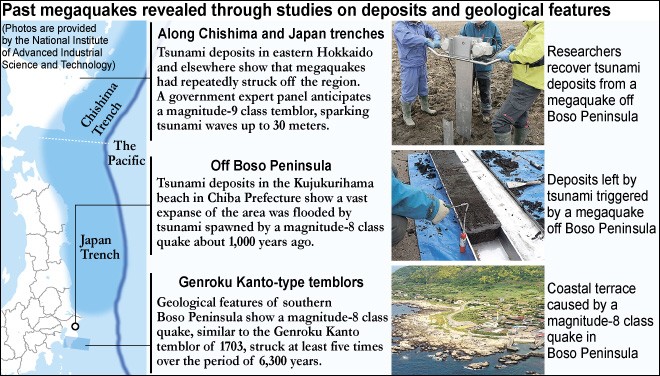 Researchers have uncovered evidence of previously undocumented ancient megaquakes whose characteristics are now being used to help Japan prepare for the next devastating seismic event.

“Our academic objective is uncovering past temblors based on observations of geological features in a region, but we are hoping that the outcome of our research will be reflected in measures to minimize damage from a disaster,” said Masanobu Shishikura, a researcher on paleoseismology with the National Institute of Advanced Industrial Science and Technology (AIST).

Scientists and government officials are bolstering efforts to come up with likely scenarios for where strong earthquakes may occur so that the country can mitigate the damage.

The new research on underground deposits, geological and geographical features may help in the preparations.

One of the previously unknown quakes, estimated in the magnitude-8 range, occurred off the Boso Peninsula in Chiba Prefecture about 1,000 years ago, according to research published in September by the AIST and other institutions.

The research group studied underground deposits in rice paddies near the Kujukurihama beach stretching about 60 kilometers on the east side of the peninsula facing the Pacific.

When sediments o the paddies at depths of between 1 meter and 1.5 meters from the surface were dug up with equipment known as a “geo slicer,” the sandy layers turned out to contain fossilized remains of foraminifera, amoeba-like, single-celled protists found in all marine environments.

Yuki Sawai, a chief senior researcher at the AIST who specializes in paleoseismology, said the foraminifera remains and the way the sediments accumulated indicate that those sand deposits were washed inland by a tsunami.

Radiocarbon dating of fossils of aquatic plants’ fruits and insects left in the layers shows that the deposits were formed about 1,000 years ago.

Sawai’s research team concluded that a tsunami capable of submerging the entire area was triggered by a magnitude-8 class earthquake.

Another research project countered a leading theory that magnitude-8 class temblors, such as the magnitude-8.2 Genroku Kanto earthquake of 1703, occur in the Kanto region at an average interval of 2,300 years.

Scientists at the University of Tokyo and the AIST asserted that earthquakes of that scale have hit at least five times over the past 6,300 years at intervals ranging from 500 years to 2,800 years.

Shishikura, who heads an AIST team researching trench-type quakes, said fossilized clams discovered in sediments of a costal terrace on the peninsula help to determine when such temblors have struck.

The government’s long-term projection for future mega-events had been based on seismic activity ascertained through ancient texts over the period spanning hundreds of years.

That was changed after the magnitude-9.0 Great East Japan Earthquake and tsunami in March 2011 left about 18,000 people killed or missing in the northeastern Tohoku region of the country.

The devastation prompted the government to revise its forecasts and disaster preparations and forecasts to cover events as far back as possible, using investigations into tsunami deposits left on land and the traditional method of analyzing old documents.

The results of a study on sediments to trace ancient quakes are now incorporated into the government’s long-term projections for earthquakes.

In an assessment released in 2017, the government upgraded the probability of an extremely powerful quake originating in the Chishima Trench, which stretches in the Pacific near Hokkaido and the Chishima Islands, also known as the Kuril Islands, to “likely imminent.”

It cited a study on tsunami deposits discovered in the Kiritappu Wetlands in eastern Hokkaido and elsewhere.

Progress has also been made in research on earthquakes centering on the Japan Trench that run north to south off the Tohoku region.

Based on the new findings, the government released a projection in December that under a worst-case scenario, 199,000 people would be killed in a tsunami caused by a magnitude-9 class earthquake off Hokkaido and the Tohoku region.

The height of the tsunami is estimated to reach up to 29.7 meters in Miyako, Iwate Prefecture, and a maximum 27.9 meters in Erimo, Hokkaido.

Techniques using more indicators are advancing and finding signs of past seismic activity.

The species existed only in places right beneath the water surface and had a habit of adhering to rocks, much like barnacles. If fossils of this variety are discovered at a location higher than the current sea level, that means that they used to be below the water level.

Shishikura and his team are currently involved in a paleoseismology study using the clam worm at the Kii Peninsula in the Kansai region, which faces the prospect of a megaquake occurring along the Nankai Trough stretching off central to western Japan.

The death toll from a maximum magnitude-9.1 earthquake along the trough could reach 323,000, according to a government estimate.