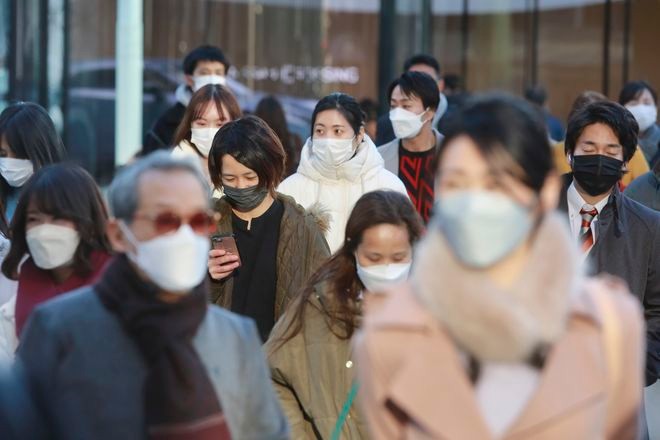 People wearing face masks to protect against the spread of the coronavirus walk on a street in Tokyo on Jan. 12. (AP Photo)

Daily figures not seen in months were reported by local governments around the nation.

The last time the capital had more than 2,000 cases was Sept. 4 when 2,370 were reported, metropolitan government officials said.

COVID-19 figures have been spiking across Japan since the year-end and New Year break after dropping to very low levels.

The daily average of cases in Tokyo for the week ending Jan. 12 came to 1,148.7, a roughly eightfold increase over the average of the previous week.

Patients in their 20s accounted for about 30 percent of the new cases.

Only four patients displayed symptoms serious enough to require the use of a ventilator or other equipment to breathe. The figure was unchanged from the previous day.

Daily cases among U.S. military personnel hit more than 300 for four days in a row until Jan. 11.

Yamaguchi Prefecture, which like Okinawa and Hiroshima prefectures, is now covered by pre-emergency measures confirmed a record 182 cases on Jan. 12. Of that number, 79 were in Iwakuni, where the U.S. Marine Corps Air Station Iwakuni is located.