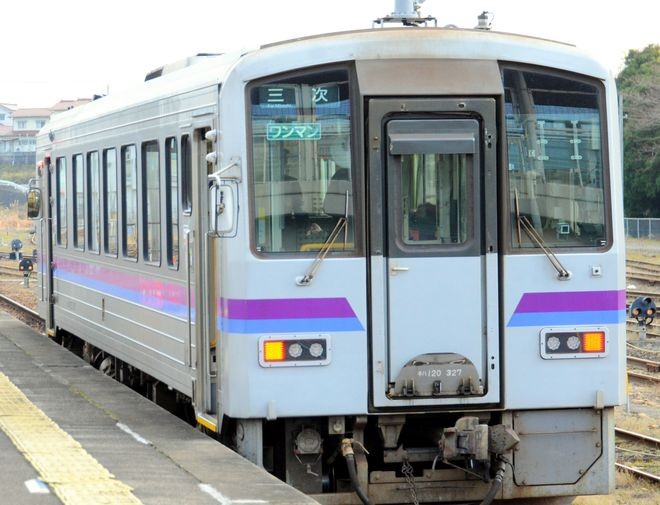 A single-car train, which often operates without conductors along the JR Geibi Line, stops at Miyoshi Station in Miyoshi, Hiroshima Prefecture, on Dec. 10. (Takahiro Okubo)

Financially struggling railway operators say they are at a loss over how to deal with the government’s push to have security cameras installed on new trains, prompted by a series of high-profile assaults on passengers.

The transport ministry began considering making it mandatory for all new train cars to have cameras on board for crime-prevention purposes late last year, leaving operators in rural regions upset about the requirement.

Far fewer passengers ride smaller, local lines than their urban counterparts, raising questions over whether the pricey countermeasure will be cost-effective for those smaller rail lines in the end.

As part of a safety drill on Dec. 10 at Miyoshi Station in Miyoshi, Hiroshima Prefecture, along the JR Geibi Line, a man armed with a knife turned up on the train.

The training scenario was organized after a passenger was stabbed on a Keio Line carriage in Tokyo in October. Under the guidance of personnel from the Hiroshima prefectural police, staff learned how to handle suspicious individuals and deal with a situation like this.

West Japan Railway Co. (JR West), operator of the Geibi Line, which runs through mountain areas in Hiroshima and Okayama prefectures in the Chugoku region, is alarmed at the possibility of these sort of attacks because of issues specific to running rural train lines.

Some of the sections on the Geibi Line could be closed down because of the declining ridership. Most of its trains on the line are comprised of only one to two cars and are operated without a conductor on board.

Stations are located far from each other along the line, and many elderly passengers have difficulty boarding and exiting from the trains.

For those reasons, they are particularly vulnerable to attackers.

“Passengers could more easily be confined in trains along rural lines compared with urban railways, making it difficult for them to flee,” said Shuji Fukunaga, head of JR West’s Miyoshi branch.

Despite those concerns, only four train cars have been outfitted with security cameras on a trial basis along the Geibi Line and other conventional JR routes in Chugoku’s five prefectures.

JR West has said it will install more surveillance cameras on its trains, but for the time being the policy is supposed to only apply to certain routes in the Kansai region that have a lot of passengers.

Transport minister Tetsuo Saito announced plans on Dec. 3 to mandate rail companies to equip their new cars with surveillance cameras in response to high-profile violent crimes such as the stabbing rampage on the Keio Line.

But rural railways were perplexed by the prospect of how deep they will have to reach into their coffers given their cost-effectiveness on rural lines.

Setting up security cameras entails huge expenses. East Japan Railway Co. (JR East) spent 11 billion yen ($95.3 million) to introduce cameras on 8,300 train cars in the greater Tokyo metropolitan area in 2018. While JR East said it does not disclose “the cost for a single car,” it is estimated to cost more than 1 million yen.

The budgetary burden is especially severe for small local lines. In fiscal 2020, 90 percent of railways nationwide reported losses owing to the widespread impact of the novel coronavirus outbreak.

All six JR companies were in the red in fiscal 2020, including JR West which logged a record loss. The situation for them is so tight, officials said, that they are becoming increasingly unlikely to make large investments into local rail networks.

“The issue (of anti-crime cameras) was put on the table for discussions, but we have had no choice but to tackle even more urgent challenges first,” said a representative of the financially ailing JR Hokkaido.

“No new conventional cars have not been produced for many years due to the dwindling number of passengers,” said a spokesperson at JR Shikoku. “We have no plans to introduce new cars as of now.”

Saito said trains with fewer cars that are typically available in rural areas will be exempted from the obligation to install security cameras and that the transport ministry will consider offering subsides to local operators with a weaker financial base.

But even that has not been enough to stop rural lines from raising a ruckus.

“Even if all the costs to outfit trains with crime prevention cameras would be covered by subsidies, the circumstances would remain very difficult for us,” said an executive of a third-party rail company that operates along the Sea of Japan.

That is because of the extra costs from camera maintenance. Plus, rail operators will have to take steps to properly manage the recorded data and prevent footage from leaking, so they might need dedicated personnel for that.

“How much of a risk of these sort of incidents do they (authorities) believe exists along local lines with fewer passengers?” said the rail company executive. “Forcing us to take countermeasures designed by taking into account only the circumstances in Tokyo will simply cause trouble.”

Another problem involves what kind of camera system should be incorporated.

The transport ministry expects rail operators will introduce a monitoring system that lets drivers and conductors instantly examine the conditions aboard, given that in the Keio Line case the crew found it difficult to confirm what was happening.

Still, it is apparently common for railway operators that have surveillance cameras on their trains to keep the data in SD memory cards and other media storage devices so that the recorded videos can be checked later.

A representative of the Astram Line in Hiroshima, which has an onboard camera system, said the transit system’s monitoring framework was not put into operation with the aim of preventing acts of mass violence like the stabbing attack.

“We put emphasis on it as a means to stop crimes like molestation and pickpocketing,” said the Astram Line representative.

Introducing better cameras and other new modes of surveillance would further ratchet up their expenses.

Seiji Abe, a professor of traffic policy at Kansai University, pointed out that high-quality cameras are not the first thing that should be weighed to step up security.

“Anti-crime cameras will not be necessary for shorter lines with less risk of experiencing heinous incidents,” Abe said, although he also acknowledged that surveillance cameras will be among the options for well-financed rail operators.

The Keio Line train where the attack transpired had 10 cars. But trains in rural regions typically have only one to two train cars. Even in urban areas like Hiroshima and Sapporo, where more people use trains, the most common ones only have four to eight cars.

“The crew members will be able to sufficiently assess the conditions onboard without cameras,” said Abe. “Operators should start with more feasible steps, such as having crew and police officers patrol cars more frequently and raising awareness among passengers of where the emergency buttons are on train carriages.”