Akita ranked as most ideal country area for senior citizens 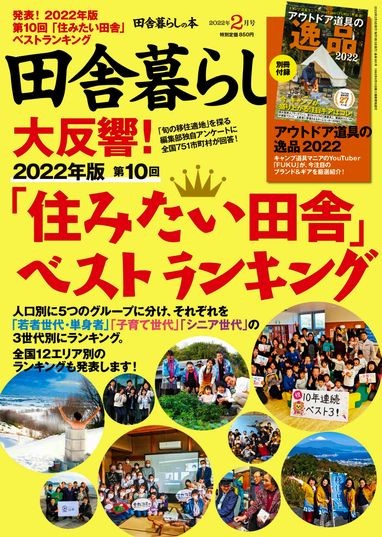 The February issue of Takarajimasha Inc.’s monthly magazine Inaka Gurashi no Hon (Country life book) provides a ranking of country towns, cities and villages that are easy to live in. (Provided by Takarajimasha Inc.)

AKITA--This northern “snow country” city ranked No. 1 in a survey of Japanese municipalities with 200,000 or more residents for its friendliness to elderly citizens.

The 2022 ranking of comfortable rural towns and cities was unveiled by publishing firm Takarajimasha Inc. in the February issue of the monthly magazine Inaka Gurashi no Hon (Country life book). The list has been an annual feature since 2013.

“This provides a good opportunity for people nationwide to learn about how nice it is to live here,” said an Akita city official. “We plan to take advantage of this to lure more people to settle here.”

For the listing, Takarajimasha sent out a questionnaire to municipalities across the nation to assess how actively they are trying to attract newcomers. The questionnaire covered 276 topics, such as available medical services, the child-rearing environment and natural surroundings.

The survey tallied responses from 751 cities, towns and villages in country areas. It does not reflect the opinions of individuals who relocated to the surveyed municipalities.

Thirty-six of the respondents fell into the category of municipalities with 200,000 or more residents.

According to Takarajimasha, Akita was named the ideal place for senior citizens because of its natural scenery--mountains, rivers and the sea--and many cultural facilities.

The study also took note of the fact that fewer crimes and disasters are reported there. Fixed route buses available for those aged 65 or older for 100 yen (87 cents) per ride, combined with other generous public life support services targeting elderly individuals, were also evaluated highly.

Another factor was that medical centers and shopping facilities are situated across Akita in a balanced manner that makes them more accessible.

Akita also came up trumps for non-senior residents. Among the 36 municipalities with populations of 200,000 or more in the survey, Akita ranked second for young and single people. It took the No. 3 spot for parents with small children.

Among 107 municipalities surveyed in the northeastern Tohoku region, Akita topped the ranking in all three divisions of elderly residents, young individuals and households with young children.

“The measures that we have been taking to render the city easier to live in, not only for senior citizens but also for youngsters and those with small children, were appreciated,” said an Akita official at the city’s department working to mitigate population decline.