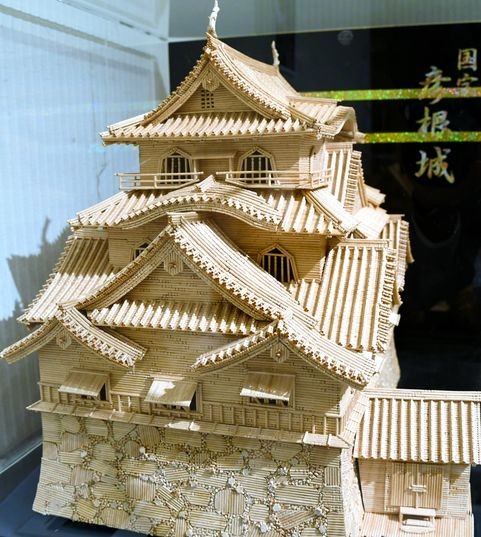 Hikone Castle built with toothpicks by Shigenobu Sato on display at the Ryuo library in Ryuo, Shiga Prefecture, on Dec. 10, 2021 (Shun Yoshimura)

OMI-HACHIMAN, Shiga Prefecture--Shigenobu Sato found himself at a loose end after he reached the mandatory retirement age of 60.

But over a meal one day, he had a flash of inspiration when he caught sight of wooden toothpicks on the table.

Seeing as he had worked in machine design, Sato wondered if he could put his dormant skills to be creative.

That was 11 years ago. Sato, now 74, has won local renown for his attention to detail when creating castles out of toothpicks. He even manages to create walls that look like they were fashioned from stone and tricky "shachihoko" fish-shaped ornaments that adorned the roofs of the feudal structures.

Sato started out by making a model of his own home because he had a design blueprint of the structure and knew his way around inside out.

He purchased around 5,000 toothpicks for the project, slicing off the pointed ends with a cutter and connecting them with wood glue.

It took about a year for Sato to build the model, which measured 26 centimeters in height and 30 cm in width.

Buoyed by the reaction of friends when they saw his replica, Sato got hooked on making models with toothpicks.

He went on to make nine replicas of historical buildings, such as Hikone Castle, Matsue Castle and Horyuji temple’s Kondo main hall.

"Whether it is a castle or my house, my main work consists simply of making a persistent effort to connect the toothpicks," Sato said.

Last September, he completed the model of Matsue Castle, which measures 85 cm by 70 cm. The project took two years and involved around 15,000 toothpicks.

Sato reckons he got through more than 100,000 toothpicks to create his nine projects.

"The trick is to first give it a try. And if you continue, even if only slowly, it will take form in time," Sato said. "That's what I learned from toothpicks."