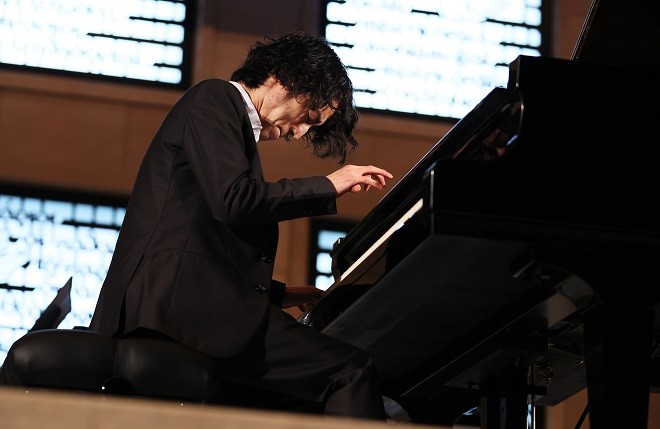 If Hayato Sumino were only a classical pianist, then reaching the third round of the prestigious 18th International Chopin Competition would be enough for him to rest on his laurels.

But Sumino, 26, is more in an age where he is up on the latest technology and has his own YouTube channel under the name of Cateen.

Although he did not win the Chopin competition in October, Sumino’s unique background made him stand out in the field of the world’s top pianists.

His musical arrangements posted across genres have attracted about 900,000 followers on YouTube.

While training as a classical pianist, Sumino also was educated in the latest music information processing technology and artificial intelligence at a research institute in Paris.

Upon his return to Japan after the Chopin competition, Sumino’s first gig was a lecture and performance at a school in Kobe.

He played Chopin classics such as the “Minute Waltz,” and entertained junior and senior high students with an ad-lib medley of songs such as “Castle in the Sky” and “Merry Christmas, Mr. Lawrence” at their request.

In an interview with The Asahi Shimbun, Sumino reflected on his eventful 2021 and talked about the future.

Question: You are involved in every genre such as classical music, jazz and pop. Yet, you don’t belong to any category. You have an extremely original presence. Do you ever feel lonely or tired in exchange for having this kind of freedom?

Sumino: Actually, I had never thought that the road I had traveled was “not ordinary” until the Chopin competition. But it became evident after the competition.

People often say I am living “outside the box.” But I am just using common sense and moving among multiple worlds. A life that can live in various worlds is absolutely more interesting, isn’t it?

Q: Looking back on the Chopin competition afresh, what kind of experience was it?

Sumino: It was a continuous conflict. All the more because I have done various music other than classical music, elements that should not be mixed in might have mixed in with my music unknowingly, I wondered. I wasn’t sure if I should really play Chopin here. Various thoughts came to my mind, and I was very scared and became absolutely nervous.

But, at the same time, I am a person who is trying to make music that can be born because there is no barrier. So I felt I wanted to show my music on a big stage that was the Chopin competition.

Q: Why did you want to attend the University of Tokyo and not a more traditional conservatory of music?

Sumino: Because there were many things at the University of Tokyo that I wanted to do, too. Because I liked math as much as music.

But certainly I felt a subtle sense of distance toward well-behaved classical music. I was taken with hard rock when I was in junior and senior high school and arranged (some songs), played on a piano and posted them on a video site. I feared that the piano would end up just being a hobby for me. But more than that, I couldn’t picture myself going to a conservatory of music and practicing all day and doing nothing else.

Q: How did you manage to both play the piano and study?

Sumino: I have often been asked that. But actually I have never tried to do both well. I have just thoroughly focused on each accordingly from moment to moment. As a result, I am who I am today.

When I want to play the piano, I play the piano all the time. There are times I do research only. I forget the time and stick with it to the end as long as I want to. I have never thought about efficiency. Suffice to say that this is a key to have it both ways.

Q: When you were in graduate school, you went to study at the Institut de Recherche et de Coordination Acoustique/Musique (IRCAM) in France, which is at the cutting edge of contemporary music.

Sumino: I belonged to a laboratory that handled general artificial intelligence. At the time, AI equaled image recognition, and there was nobody else but I who studied sound. Then my professor advised me to go to IRCAM if I was interested in sound. At the time, I did not know anything about IRCAM, like it was an institution organized by Pierre Boulez under the sponsorship of the French government and it was where Ichiro Nodaira studied.

Q: You participated in a piano competition in Japan in August that year right before going to study abroad.

Sumino: I felt horribly desperate about my future at the time. I was doing an internship at an entrepreneurial venture while taking a job in mind. I participated in the competition as one of such options. Then I won the grand prize unexpectedly. At the moment, a life as a pianist became realistic for the first time to me. It was a big turning point.

Q: It seems you have been busy with livestreaming on Instagram and concerts and haven’t taken a day off.

Sumino: Indeed. A state of being busy does nothing but consume me and it is the worst. So I have consciously received input from the world outside music. Recently, I was greatly inspired by Ango Sakaguchi’s “Nihonbunkashikan.”

Ango’s sensibility that beauty is not something to be created consciously is really poignant to me right now. I think it verbalized clearly the “beauty” that I myself felt toward Chopin--in other words, beauty felt toward something that is not altered at all.

Q: Hayato Sumino and Cateen. Is there a difference between the two?

Sumino: It’s not like I consciously use the two differently. I am someone who always wants to keep a balance. When I become too serious, I think I should act funny just a little. When I play too much, I think I should get a bit more serious. When I get skewed to one, the other me comes out. Two contradicting opinions arise within me, and an action to neutralize these arises spontaneously. Hayato Sumino and Cateen. All the more because there are these two, I think I can pursue my originality while maintaining a balance inside of me.