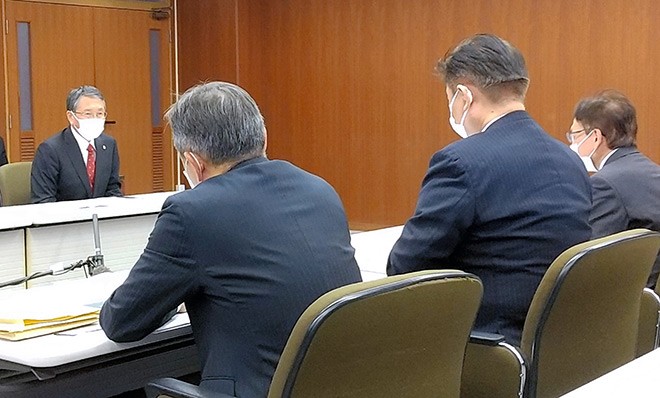 NISHINOOMOTE, Kagoshima Prefecture—The Defense Ministry announced that it will build a Self-Defense Forces base here that will be used for relocated U.S. military drills, drawing a stunned reaction from the city mayor.

“The government decided to pick Mageshima island not as a candidate site but as the official site for construction of the SDF base,” a ministry official told Nishinoomote Mayor Shunsuke Yaita at the city government office on Jan. 12.

The SDF facility on Mageshima island will be used as a new training site for U.S. carrier-based aircraft that are currently using Iwoto island, also known as Iwojima, for landing practices.

“We thought an (environment impact) assessment was being conducted to decide on whether to build (the base),” Yaita said. “It’s an abrupt decision.”

A Defense Ministry official explained the rush behind the decision.

“It’s a race against time when it comes to national security,” the official said. “We need to construct the SDF facility on the island as soon as possible to strengthen our country’s defense capabilities and the Japan-U.S. alliance.”

At the end of last year, the Cabinet of Prime Minister Fumio Kishida approved the government’s draft budget for fiscal 2022 with 318.3 billion yen ($2.78 billion) earmarked for the base construction, including the costs for subsequent years.

During “two plus two” security talks between Japan and the United States on Jan. 7, Defense Minister Nobuo Kishi expressed the government’s resolve to quickly build the base. The U.S. side welcomed the move.

Mageshima island had been a leading candidate site for the relocated U.S. military landing practices since the two plus two security talks in 2011.

Japan and the United States affirmed that the island would be the official site for a new base for the landing practices.

The Defense Ministry had repeatedly stressed the importance of winning the “understanding and cooperation of locals” for the plan. But it has essentially ignored calls from Yaita to halt the project for an environmental assessment.

Last November, the ministry announced it would solicit bids for the construction of a cement plant on Mageshima island. It also began building a road along the outer perimeter of the island this month, saying the work is not targeted for the environmental assessment.

Residents in Nishinoomote in favor of the SDF base project feared they would miss out on the economic benefits if the opponents prevailed.

The central government will provide subsidies expected to reach 25 billion yen over a decade to municipalities affected by the realignment of U.S. military, but it is unlikely to give the subsidies to those opposing the project.

The Defense Ministry presented a draft construction plan on Tanegashima island, near Mageshima island, for the project at the end of last year. The plan showed SDF facilities would be built at Nakatane and Minamitane towns, which both have effectively approved the relocation plan.

“It’s a blatant attempt to cut Nishinoomote out of the loop,” said a city assembly member in favor of the project.

The jurisdiction of Nishinoomote also covers part of Tanegashima island.

The ministry’s carrot-and-stick approach put Yaita in a difficult position.

A local chamber of commerce and industry source who supports the project said the city would be left with nothing but the burden of hosting the new base if it continues its futile efforts to oppose the plan.

Yaita did not strongly protest the ministry’s decision at his Jan. 12 meeting with the ministry officials. The mayor expressed his discontent only to reporters, saying the ministry “leaves local residents behind.”