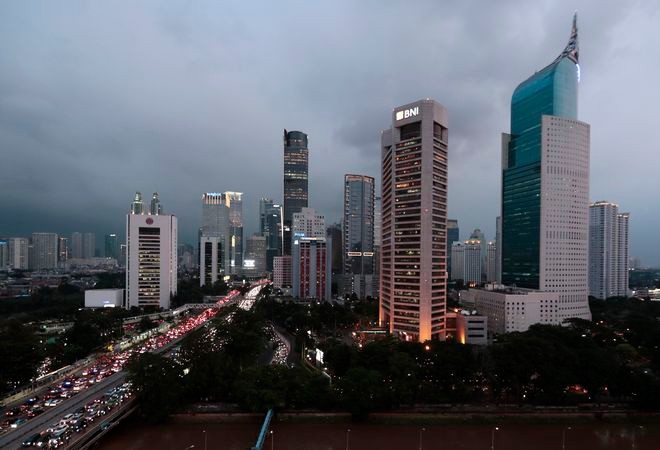 The central business district skyline is seen during the dusk in Jakarta, Indonesia, on April 29, 2019. (AP Photo)

JAKARTA--Indonesia said on Thursday it would allow 37 vessels loaded with coal to depart, in the strongest sign yet that the world's biggest thermal coal exporter is relaxing its ban on shipments.

A senior cabinet minister said in a statement the ban implemented on Jan. 1 had been eased for miners that have met a requirement to sell a portion of their output for local power generation, after the state utility procured enough coal to ensure 15 days of operation.

"I request that this is supervised closely so this also becomes a moment for us to improve domestic governance," Coordinating Minister of Maritime and Investment Affairs Luhut Pandjaitan said in the statement.

The 37 vessels included 14 ships whose clearance was announced earlier in the week.

Later on Thursday, 18 of the vessels, carrying around 1.3 million tonnes of coal, secured energy ministry verification, which is needed for a departure permit, according to a document reviewed by Reuters. The 18 vessels, the document said, were carrying coals from companies that had fulfilled their Domestic Market Obligation (DMO), under which miners are required to sell 25% of output to local buyers with a price cap at $70 per tonne for power plants.

Among the companies were units of Adaro Energy, Indika Energy and Golden Energy Mines, the document showed.

There were about 120 vessels either loading or waiting to load off Indonesian's coal ports in Kalimantan on the island of Borneo on Wednesday, according to Refinitiv Eikon data.

"We recognise that allowing loaded ships to depart is a small step in easing and progress needs to be made towards lifting the export ban," research group CreditSights said.

"Indonesia's government will monitor DMO compliance every month, which we think will help to avoid the abrupt imposition of coal export bans in the future," it said in a note.

In a parliamentary hearing, Energy minister Arifin Tasrif was asked about the DMO implementation and export ban, while a number of lawmakers called for greater transparency over DMO compliance.

"The plan of easing the coal export ban is taking place and will continue to be evaluated and we will ensure that the vessels that have been allowed to export are those which have fulfilled the DMO," Arifin said.

The maritime and investment ministry said in its statement that mining companies that had met their sales contract with PLN and 100% of their DMO requirements for 2021 would be allowed to begin exporting.

Without naming the companies, Arifin said there were 47 miners that had surpassed their DMO requirement and 32 miners that had fulfilled between 75% to 100% of their domestic responsibilities.

Miners that had not fulfilled their PLN contracts and DMO would face fines, he added.

Citi in a research note on Jan. 5 estimated around 490 out of 631 coal miners in the country had not yet fulfilled their DMO obligations. These 490 coal miners represent about 35%-40% of Indonesia's total production, it said.