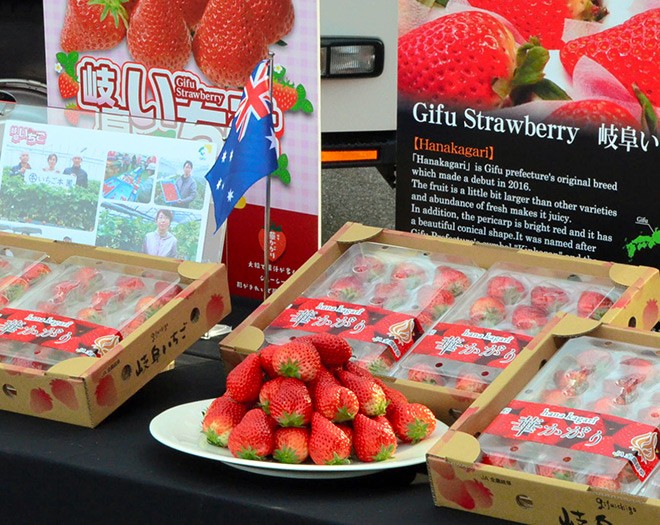 Exports surged 26.8 percent to reach 1,077.9 billion yen during the first 11 months of 2021 compared with the same period of the previous year, according to the Ministry of Agriculture, Forestry and Fisheries.

Exports of scallops leapt 103.2 percent year on year, while those of sake jumped 73.5 percent and strawberries posted a sharp 73.2 percent increase.

Beef exports also boomed, by 87.7 percent, due mainly to a new Japan-U.S. trade agreement which expanded the U.S. low-tariff quota for imports from Japan.

Robust exports were driven by efforts to bolster online sales in the face of increased at-home consumption triggered by the COVID-19 pandemic.

For years, the government has provided policy support to agricultural, forestry and fisheries exports as a way to secure the long-term viability of these industries.

The government in 2006 set a policy goal of ramping up exports from these sectors to 1 trillion yen by 2013.

Reaching the 1 trillion yen mark, albeit eight years behind the initial target, is a notable achievement given that many of the farm ministry’s policy goals, including a food self-sufficiency ratio, remain unattained.

Despite surpassing the 1 trillion yen mark, agricultural, forestry and fisheries exports only account for 2 percent of the value of overall domestic production.

The share of exports in domestic output is far smaller than that of other major industrial nations, such as 12 percent for the United States and 18 percent for Britain.

For this reason, the ministry believes there is still much room for growth in Japanese exports.

One factor cited behind the slowdown is a saturation in demand for Japanese products among well-to-do overseas consumers, who represent core customers.

Achieving the next targets will require expanding sales to middle-income consumers.

This is especially true with rice, whose production has been controlled by the government’s “gentan” policy of reducing the amount of land devoted to rice cultivation.

To further increase exports, it is vital for farmers to understand demand in overseas markets and make their own decisions on what crops they should produce and at what cost.

The key challenge is to build a structure that allows farmers to make profits from exports.

A policy of providing subsidies to support production for exports, like the one for rice, could end up keeping production costs high.

Government support needs to be focused on steps that will help raise the competitiveness of products over the medium to long term, for example, producing better varieties, making distribution more efficient and building processing facilities.

Many of the major overseas markets for Japanese farm products, such as China, South Korea and Taiwan, still maintain import restrictions introduced after the 2011 Fukushima nuclear accident.

We urge the government to make tenacious efforts to persuade them to lift their import curbs through talks to make them parties to the Trans-Pacific Partnership (TPP) multilateral trade agreement and other opportunities.

If Japan goes ahead with plans to release treated radioactive water from the crippled Fukushima No. 1 nuclear power plant into the ocean, the government will be obliged to offer detailed explanations about the safety of the measure.