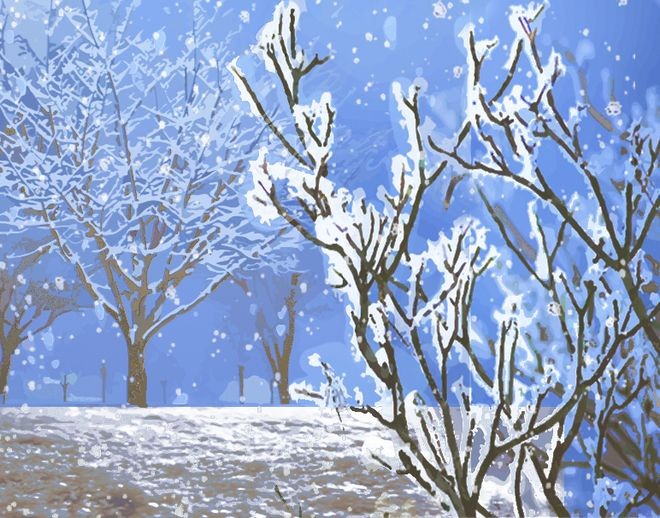 in the valley
carved by a glacier
this morning’s snow
--Ruth Mittelholtz (Walkerton, Ontario)

no wind
an owl lifts off
the snowy marsh
--Kristen Lindquist (Camden, Maine)

neighbours in the snow
a woman chased the white owl
from the snowman’s nose
--Germina Melius (Castries, Saint Lucia)

blue cranes
dreaming myself
back to the sea
--Isabella Kramer (Nienhagen, Germany)

snow...
the magic we expect
at any age
--Ana Drobot (Bucharest, Romania)

Living in one of the snowiest areas of her homeland, the haikuist was nonetheless delighted by what she saw outside the window this winter morning. Joan McNerney loved the sensation of eating fresh snow in Ravena, New York. Snow crystals made Amin Jack Pedziwiater sneeze in Rzeszow, Poland.

deep in a blizzard…
bouillabaisse steams
in a clay pot

Diffused sunlight
on the bowl of rice gruel
with seven herbs

Nika misses his neighbor in Calgary, Alberta. Hifsa Ashraf grabbed what last memories she could from Rawalpindi, Pakistan. Pippa Phillips couldn’t grasp more than her fair share of life from the icy depths of Lake Saint Louis, Missouri.

snow drifts
across the road
farm for sale

Melanie Vance rescheduled her holidays in Dallas, Texas. Padraig O’Morain worried for a woman in Dublin, Ireland. Joanne van Helvoort and her dad felt a little tired the day after celebrating “late with a little too much wine” in The Netherlands. Samo Kreutz awoke to a familiar sound in Ljubljana, Slovenia.

she stands at the bus stop
in January dark
wearing sunglasses

New Year
no different as before
his snoring

the warmth
of a lambswool blanket
finesse as a verb

John Hamley was inspired by his hard-working mother’s love for the Russian forests that stretch between the taiga to the north and the mountains to the south. Happy with her home in Bucharest, Romania, Mona Iordan read poetry by Kobayashi Issa (1763-1828).

Vast are
the steppes of Siberia
Sonya alone shovels snow

The master poet wrote this poem in 1812 when he moved back to his hometown of Kashiwabara (present-day Shinano, Nagano Prefecture): Kore ga maa tsui no sumika ka yuki gojo.

Well, this is my place
a final home with snow piled
over a meter

the year ends
I navigate skipping
towards another elsewhere

Goran Gatalica anticipated the mischief that the winter wind would do in Zagreb, Croatia.

calm evening--
in the treetop of a large pine
fresh snow

Maurice looked up: Then she got blanketed by snow.

new balance
the sound of snow falling
from the tree

Anne-Marie McHarg from the British Isles and Subir Ningthouja from India were absorbed by a deafening silence.

stillness...
chirps of a cricket
flow into the walls

Vladislav Hristov clasped his hands warmly in Plovdiv, Bulgaria. Chilled to the bone at a dental clinic in Nagoya, Kanematsu dropped his medicine tablets onto the floor.

Vance knows that snowflakes have different shapes, and Jay Friedenberg noted that difference affects how they float. Gatalica felt they followed a regular repeated pattern of movement. Luminita Suse wrote a poem and painted a picture for the “DailyHaiga” journal about a spot where she saw snowflakes land.

each one
falling differently...
snowflakes

the New Year
a comfortable rhythm
of first snowflakes

The next issues of the Asahi Haikuist Network appear Feb. 4 and 18. Readers are invited to send haiku for the Winter Olympics or white tigers on a postcard to David McMurray at the International University of Kagoshima, Sakanoue 8-34-1, Kagoshima, 891-0197, Japan, or e-mail to (mcmurray@fka.att.ne.jp).