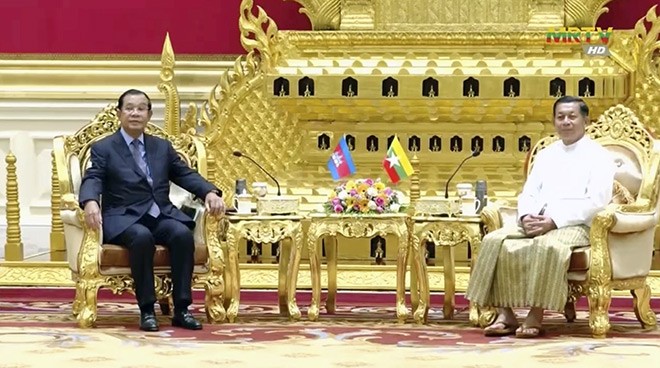 KUALA LUMPUR--Malaysia’s foreign minister said on Thursday that some Southeast Asian countries had reservations about last week’s visit to Myanmar by Cambodia’s leader, with concerns it could be seen as regional recognition of its ruling junta.

Cambodian Prime Minister Hun Sen, the new chair of the Association of Southeast Asian Nations (ASEAN) met last week with military ruler Min Aung Hlaing, the first such visit by a head of government to Myanmar since last year’s coup, dealing a blow to international efforts to isolate the generals.

Speaking to reporters late on Thursday, Saifuddin Abdullah said there were different opinions within ASEAN about Hun Sen’s visit, with some of its 10 members concerned it could be seen as legitimizing the coup-makers.

"There are people who think that he should not have taken the visit because his visit has been construed or interpreted as a recognition of the military in Myanmar," he said.

"Malaysia is of the opinion that he has the right to visit Myanmar as the head of government of Cambodia. However, we also feel that because he has already assumed the chair of ASEAN, he could have probably consulted the other ASEAN leaders and sought our views as to what he should do if he were to go to Myanmar."

Asked if he thought Hun Sen’s visit achieved anything, Saifuddin said: "No."

Myanmar has been in turmoil since the coup, with the military using deadly force to quell protests and facing armed resistance on multiple fronts from opponents it calls "terrorists".

Thousands have been arrested and ousted leader Aung San Suu Kyi, 76, has been convicted of crimes including incitement and breaching coronavirus rules.

ASEAN late last year took the unprecedented step of sidelining junta boss Min Aung Hlaing from its leaders’ summit over his failure to implement a five-point peace plan to end hostilities and start inclusive dialogue, which he had agreed to with ASEAN.

Saifuddin said it was unclear whether Cambodia, as ASEAN chair, would continue to exclude Myanmar’s junta from ASEAN meetings until it showed progress, a position favored by previous chair Brunei, which Malaysia backed.