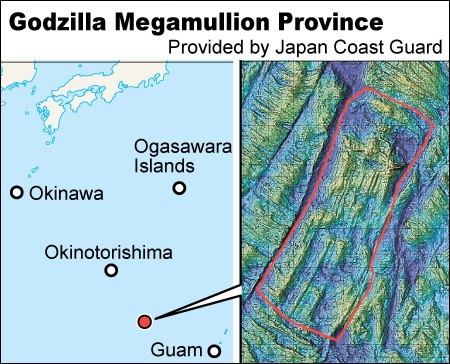 Godzilla will soon have a home as an undersea province off Okinotorishima, a tiny island that is Japan’s southernmost point.

A proposal to name the area "Godzilla Megamullion" was approved at a January meeting of the Sub-Committee on Undersea Features Names (SCUFN).

The committee was jointly set up by the International Hydrographic Organization and the Intergovernmental Oceanographic Commission of UNESCO.

The name will be used in nautical charts and research papers.

The megamullion is 125 kilometers in length and 55 km in width, about three times larger than Tokyo.

Its shape does not bear a resemblance to Godzilla, but researchers thought the monster’s name would be fitting because it is believed to be one of the largest on Earth.

According to Japan Coast Guard’s Hydrographic and Oceanographic Department, a megamullion is a dome-shaped rise created by the exposure of mantle beneath the Earth’s crust, typically caused by a large-scale dip-slip.

The megamullion in question is on the ocean floor in the Pacific, about 600 kilometers southeast of Okinotorishima island.

It was discovered during a demarcation survey of the continental shelf conducted by the Japanese government in 2001. The area has many ridges, about 1,000 to 2,500 meters high.

The Godzilla film series first debuted in 1954. Since then, the monster has appeared in more than 30 films, both domestic and foreign.

In the first film of the series, the prehistoric sea creature was believed to have been hiding in a submarine cave.

Members of a research group, consisting of the Japan Coast Guard and others, have informally called the area, Godzilla Megamullion.

But it was required to have a globally shared name to become a marine science research object.

The Japan Coast Guard played a role in the proposal to name the area after Godzilla.

It had reached an agreement on the use of the name with Toho Co., which owns the Godzilla trademark.

Keiji Ota, chief Godzilla officer of Toho, said in a statement, “I am truly honored that (the megamullion) bears Godzilla's name, the Earth’s most powerful monster.”

He said the creature and ocean are “inseparable” and believes that Godzilla “has gracefully swum above the gigantic Godzilla Megamullion province.”