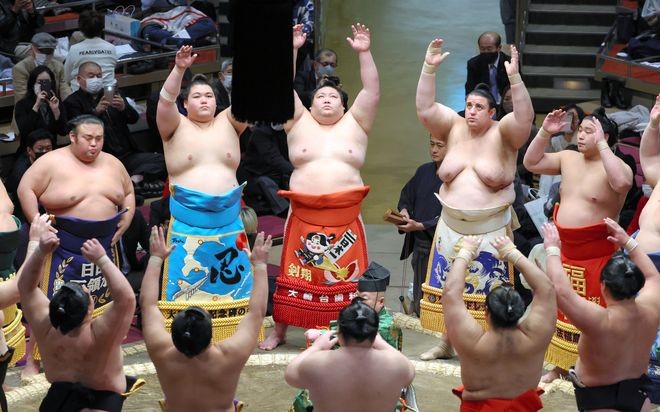 New makuuchi Oho, second from left, and Wakamotoharu, far right, stand on the ring for the “dohyo iri” ritual with ozeki Takakeisho, far left, and others on Jan. 9 at Tokyo’s Ryogoku Kokugikan arena. (Tatsuya Shimada)

Fading public interest and a declining number of wrestlers is weighing heavily on the traditional sport of sumo.

However, siblings and relatives of active and past competitors entering the dohyo, and recently retired popular champions-turned-stablemasters, are attracting attention at the start of the new year.

As the sport enters a new era after the recent retirement of yokozuna great Hakuho, who won a record 45 career championships, hope lies in these familiar faces and newcomers.

The other, Wakamotoharu, 28, is the older brother of Wakatakakage, 27, who had formerly joined the makuuchi division. They are the 12th sibling wrestlers in makuuchi and grandchildren of ex-komusubi Wakabayama, who was well accomplished in the dohyo from the 1940s to 1950s.

Oho and Wakamotoharu, both of whom have not only two brothers competing in the professional sumo world but also a wrestler father and grandfather, are expected to wow diehard fans.

From the standpoint of wrestler recruiters, prospects such as Oho and Wakamotoharu who have siblings in sumo likely inherited the gifted genes immersed in sumo families.

“Finding new trainees becomes increasingly difficult every year in this day and age,” said a stablemaster. “It will be the best thing if we can accept two to three children from the same parents supportive of their offspring entering the dohyo, because that will save us the trouble of searching for wrestlers.”

In the 1990s, when the unprecedented "Waka-Taka" sumo boom inspired by the yokozuna brothers known as Wakanohana and Takanohana took Japan by storm, around 900 individuals were registered as wrestlers.

Though the number hit a record-high 943 in the 1994 Summer Grand Sumo Tournament, no more than 665 competitors, down nearly 30 percent from the peak, emerged at the latest New Year tournament.

Increasingly fewer young people today aspire to compete in the dohyo, as Japanese wrestlers have failed to perform better than their foreign counterparts and scandals involving violence and other problems surfaced.

Aside from the downward trend, whereas the traditional sport remains a major entertainment sector in Japan, a smaller number of youngsters compared with other sports want to enter the sumo ranks.

According to the Japan Sumo Federation for amateur wrestlers, 7,000 athletes are registered to take part in competitions. The figure is an estimated 3,000 fewer than 20 years earlier.

With the smaller wrestler population in mind, some 100 masters in pro circles are supposed to play a leading role in discovering new talent among prospective athletes. But junior high graduates these days less often aspire to become pro sumo wrestlers, as attaining a proper education is seen as more important.

More recently, the novel coronavirus pandemic is dealing a fresh blow to the recruiting drive as well.

Sumo wrestlers annually tour dozens of locations nationwide for exhibitions, offering opportunities for local young individuals who have not even tried to don a “mawashi” loincloth to interact with wrestlers and learn about sumo. The practice has been canceled since spring 2020 amid the health scare.

Stable operators allow outsiders to practice with pro wrestlers so they can see firsthand the little-known aspects of the sport, such as the strict in-house rules and daily life in the stables. The opportunity for newcomers to experience sumo is now unavailable.

As a result, as few as 61 new disciples--the third lowest since the system of six official tournaments annually was introduced in 1958--passed the screening held to coincide with the formal tournaments last year to enter the professional ranks.

Fewer newcomers than 2021 came only at the time a match-rigging scandal came to light in 2011. Following the exposure of the notorious practice, only 60 and 56 became wrestlers in 2011 and 2012, respectively.

New wrestler numbers are on a continuous decline, though the body size standards and the age limit for screening have been relaxed.

This is seemingly due to the fact that it is still difficult, despite the diminished wrestler population, to be promoted to higher juryo and makuuchi divisions where a total of just 70 competitors can earn monthly salaries.

The five new disciples selected on the sidelines of the latest tournament, including a younger brother of a sekitori wrestler in the top two divisions, have all graduated from high schools or colleges that have sumo clubs with good track records.

“Athletes do not make up their minds to become sumo wrestlers unless they have confidence that they can perform at least to a certain level in the ring,” said a stablemaster in his 40s.

NEW STABLEMASTERS COMING TO THE RESCUE

The number of sumo stables has dropped to 42 from 55 during the peak period in 2004 largely because of closures and integration connected to the wrestler shortage.

Kisenosato, who retired in 2019 and is now known as Nishonoseki, became independent from the Tagonoura stable last summer to set up his own establishment with some former Tagonoura stable members he recruited.

Hanafusa, 18, a student at Ushiku Senior High School in Ibaraki Prefecture, which is affiliated with Toyo University, won the individual division of the Kanto student sumo competition, and Nishonoseki had previously expressed an interest in him.

Nishonoseki started frequenting the training site of the high school’s sumo club shortly following his retirement. Hanafusa was then in his first year there, and Nishonoseki coached him on battering practice.

Nishonoseki said he found that Hanafusa’s “strong power” will translate in being competitive in the pro ranks. Subsequently, Hanafusa decided to join his stable, saying, “I felt something poignant,” after he trained with the retired yokozuna.

Nishonoseki, who will open a new stable in his hometown of Ibaraki Prefecture in May, is planning to hold joint practice sessions for his stable members and the school’s sumo club with the aim of drawing its graduates into the professional sumo world in the future.

Finishing his stellar career as a sumo wrestler last autumn, Hakuho, even during his competitive days, had been aggressively seeking members to join his team following the envisioned establishment of his own stable.

It is known that makuuchi Ishiura and juryo Enho were invited by Hakuho to join his stable.

Hakuho has likewise been making efforts to raise the ranks of the sumo population, such as organizing an international boys’ sumo event from more than 10 years ago. After changing his name to Magaki following his retirement, he is fully devoting himself to finding new talent.

“I want to return the favor to sumo circles,” said Magaki.

Magaki is dreaming of the day when his disciples will show off skills on the ring in the makuuchi division against the students of Nishonoseki, who was a fierce rival of Hakuho in their long careers on the dohyo.