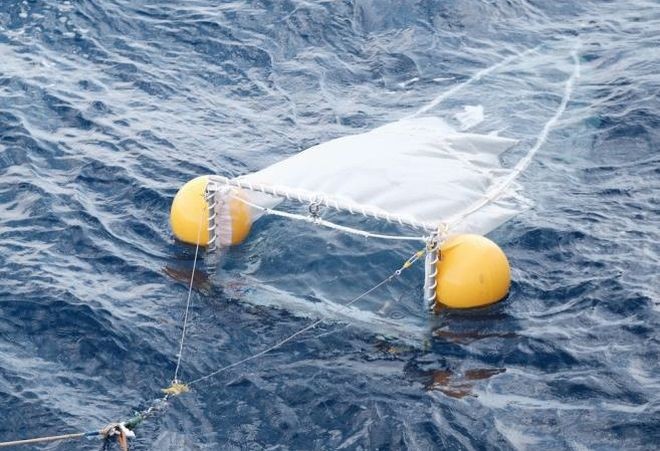 Floating microplastics are gathered at depths of up to 50 centimeters by trawling a fine-meshed net across the surface of the ocean. (Provided by the Japan Agency for Marine-Earth Science and Technology)

Typhoons churn up so much plastic debris littering beaches and other areas that the volume of plastic trash floating in the world’s oceans rises 1,300-fold in weight afterward, according to researchers.

A team at the Japan Agency for Marine-Earth Science and Technology (JAMSTEC) based in Yokosuka, Kanagawa Prefecture, found that foam polystyrene containers and packages hurled in all directions by a typhoon’s howling winds and high waves get broken down into miniscule pieces.

The team headed by Ryota Nakajima estimated that 10 million tons of plastic waste flows into oceans annually. The issue is of growing international concern due to the impact this has on the marine ecosystem.

Given the difficulty of predicting when typhoons will hit, little research has been done to date on the additional volume of oceanic trash floating about following powerful storms.

With that in mind, the team members boarded a survey vessel to examine floating plastic waste before and after Typhoon No. 15, which generated record rainfalls, hit the Kanto region in 2019.

The researchers collected pieces of plastic floating on the surface 30 kilometers off Sagami Bay close to Tokyo to get an idea of the scope of the problem of plastic trash whipped up by typhoons.

Using a fine-meshed net, they recovered microplastics measuring 5 millimeters or smaller, as well as fragments 5 to 25 mm long, and discovered that the weight of plastic debris increased 1,300-fold to 91 kilograms per square kilometer a day after a big typhoon compared with three days prior.

A notable finding was that bits of foam polystyrene 2 to 3 mm in diameter increased dramatically. Foam polystyrene containers and packages are made by bonding those particles through heating.

The force of a typhoon’s winds and the impact of pounding waves causes the material to break down quickly, the researchers said.

The team members called for urgent action to prevent an even greater influx of plastic influx because some regions in Asia that are often hit by typhoons are globally known as areas that are awash with oceanic plastic waste.