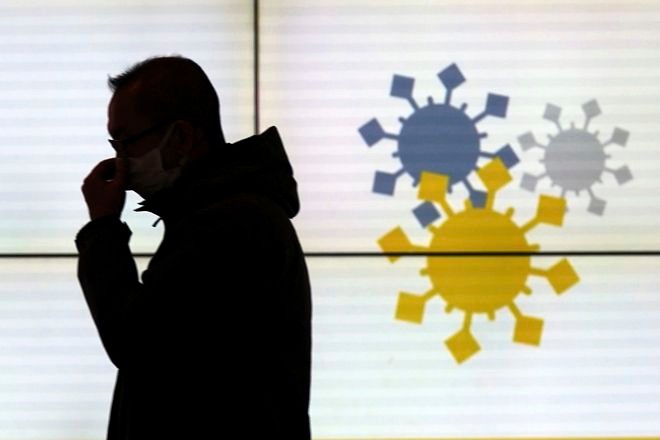 A man wearing a protective mask to help curb the spread of the coronavirus walks in front of a public awareness notice on the Omicron variant of the novel coronavirus on Jan. 13 in Tokyo. (AP Photo)

Just two days ago, the nationwide tally exceeded 10,000 for the first time since Sept. 9.

Patients with severe symptoms helped to drive figures upward, according to health ministry data as of Jan. 13. The number of people who fell into that category hit 221, 96 more than Jan. 12. It was the first time for the figure to exceed 200 since Oct. 24, the ministry said.

In Tokyo, health officials confirmed 4,051 COVID-19 cases on Jan. 14, about four times the figure for the previous Friday, while other prefectures reported record figures.

Osaka Prefecture logged 2,826 new cases the same day, but said none of the patients had the Omicron variant of the novel coronavirus.

Authorities there said a woman in her 60s and a man in his 70s had died of COVID-19.

Okinawa Prefecture continued to face a surge in infections and reported 1,596 new cases among islanders on Jan. 14, the third consecutive day for the daily count to exceed 1,000.

The figure, which excluded people working at U.S. military bases, was the fourth highest for the prefecture.

Prefectural officials said they were informed of 480 new cases by the U.S. military, the second highest tally at U.S. facilities across Okinawa since the pandemic started.

Other prefectures, such as Kyoto, Kumamoto, Yamanashi, Nagasaki, Nagano and Hiroshima, all reported record figures for COVID-19.

The occupancy rate of hospital beds, a barometer for the Tokyo metropolitan government to implement tougher measures, came to 15.1 percent as of Jan. 13. Officials were expected to consider requesting the central government to issue pre-emergency measures if the figure reaches 20 percent.

Patients displaying symptoms serious enough to require special breathing equipment totaled three, down one from the day before.

Authorities in Okinawa Prefecture said 681 health care workers at 21 medical organizations had missed work because they either had contracted the virus or were deemed to have been in close contact with a carrier.

The figure was up 20 from the previous day.

The occupancy rate of hospital beds on Jan. 14 came to 49.8 percent, while that for severe patients came to 44.2 percent.