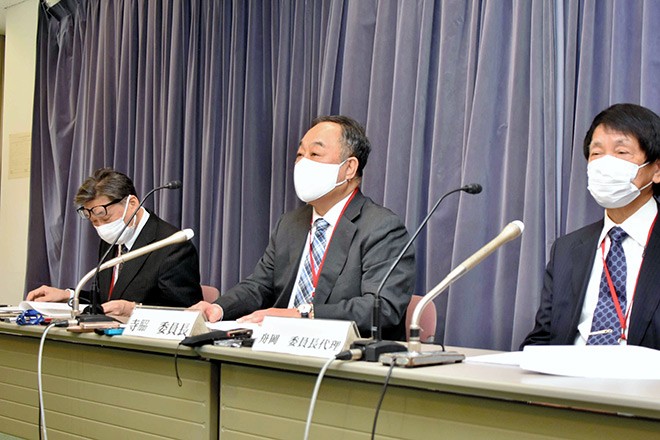 Panel members on Jan. 14 release the results of their investigation into shoddy statistics gathering at the infrastructure ministry. (Shinya Takagi)

An investigative panel looking into shoddy statistics gathering at the infrastructure ministry uncovered “inappropriate” methods dating to when the figures were first collated over two decades ago as well as a pattern of higher-ups ignoring suggestions to revise the methods used.

The panel, chaired by Kazumine Terawaki, a former high-ranking prosecutor, released its findings Jan. 14 with regard to monthly construction contract figures compiled by the ministry. The data is used to calculate gross domestic product (GDP) and other important economic indicators.

The compilation of the statistics took its present form from April 2000, but the panel found that even figures from before that time were jiggered by prefectural government officials at the behest of the Ministry of Land, Infrastructure, Transport and Tourism.

When the errant companies finally submitted reports for a number of months, those figures were added together and listed as the figure for the month the reports were submitted. But since average figures had already been included for the companies, their contract figures were inflated.

Despite the lax methods, the panel concluded there was no deliberate effort to increase the monthly figures. It said the double counting resulted from a lack of communication among ministry officials involved in collecting the statistics.

The report noted that superiors on numerous occasions ignored the recommendations of subordinates for the ministry to clean up its act.

One occasion came in January 2019 when all ministries handling fundamental statistics, including the monthly construction contract figures, were asked to review their methods following revelations the labor ministry had resorted to inappropriate surveying procedures.

In this instance, a superior decided to keep quiet about the practice of adding up of several months’ worth of construction contracts after a subordinate recommended that such action be taken.

In June 2019, another lower-ranking official also suggested scrapping the double counting practice, but was ignored.

When the Board of Audit in November 2019 pointed out the problems with the way the construction figures were collected, the infrastructure ministry the following January finally instructed the prefectural government officials in charge of collating the reports to change their methods.

But ministry officials in Tokyo continued to rewrite the monthly statistics to ensure no drastic decrease in the figures came to light due to the new collection method.

The report did not touch upon possible violations of the Statistics Law or the effect on GDP.

Terawaki said at a Jan. 14 news conference it was up to the internal affairs ministry, which oversees the Statistics Law, and investigative authorities to look into any illegalities.

He also said the infrastructure ministry should calculate any effects on GDP and explain them.

But even as the panel released its report, the infrastructure ministry admitted other oversights with regard to the construction contract reports.

The ministry is legally required to register the reports submitted by construction companies in an administrative document file, but failed to do so. The ministry also did not consult with the Cabinet Office as required by law before discarding those reports once the preservation period had expired.

At his news conference, Terawaki pointed out that the shoddy handling of statistics might have been due to the fact that many of those assigned to the section handling statistics never realized that double counting was going on.

The report also noted that many officials in the statistics section had little specialized knowledge and were not motivated to be vigilant about accuracy. That, in turn, bred a tendency to be uncritical and to simply follow past practices.

The panel was set up after The Asahi Shimbun broke a story on Dec. 15, 2021, about inappropriate statistics gathering practices.

“The result is that a response was only made after problems were brought to light and nothing definitive was done in the meantime,” Terawaki said at the news conference.

Yoshiki Shinke, chief economist at the Dai-Ichi Life Research Institute, said the report highlighted the need to consider creating a structure that gives bureaucrats the incentive to quickly disclose any errors that arise and which covers all ministries rather than just the infrastructure ministry.

Hideaki Hirata, a professor of macroeconomics at Hosei University in Tokyo, also took issue with the panel for not touching upon the impact the data tampering had on GDP, which he said may have been behind the failure of ministry officials to deal swiftly with the problems that emerged.