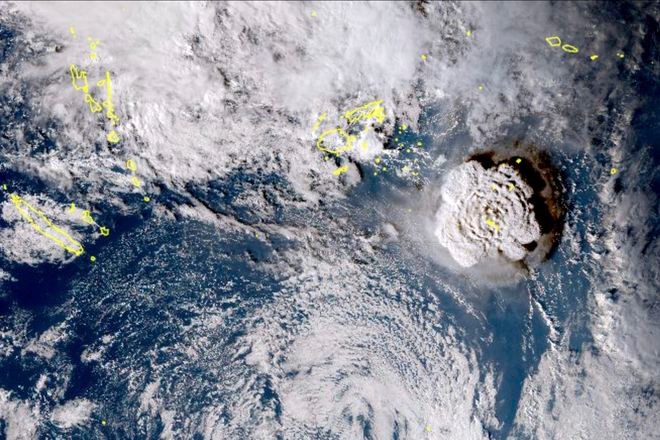 Japan's meteorological agency issued tsunami warnings in the early hours on Sunday and said waves as high as three meters were expected in the Amami islands in the south. Waves of more than a meter were recorded there earlier.

Public broadcaster NHK said no damage or casualties had been reported, interrupting its regular programming to report on the tsunami advisory spanning the entire eastern coast of the Japanese archipelago issued by the country's meteorological agency.

In a briefing, a Japan Meteorological Agency official urged people not to go near the sea until the tsunami advisory and more serious tsunami warnings had been lifted. The warnings - the first in more than five years - covered several specific areas.

He said the change in sea levels observed did not follow a familiar pattern of tsunamis following earthquakes.

"We do not know yet whether these (waves) are actually tsunami," he told the briefing.

Tsunami waves were observed in Tonga's capital and the capital of American Samoa, a U.S.-based tsunami monitor said, following the eruption at 0410 GMT of the Hunga Tonga-Hunga Ha'apai underwater volcano.

The volcano, which lies about 65 km (40 miles) north of Nuku'alofa, caused a 1.2-meter tsunami wave, Australia's Bureau of Meteorology said.

The bureau said it continued to monitor the situation but no tsunami threat had been issued to the Australian mainland, islands or territories.

Tsunami waves of 83 cm were recorded by gauges in the Tongan capital of Nuku'alofa and two-foot waves were seen at Pago Pago, the capital of American Samoa, the Pacific Tsunami Warning Center said.

Fiji issued a tsunami warning, urging residents to avoid the shorelines "due to strong currents and dangerous waves".

Jese Tuisinu, a television reporter at Fiji One, posted a video on Twitter showing large waves crashing ashore, with people trying to flee in their cars.

"It is literally dark in parts of Tonga and people are rushing to safety following the eruption," he said.

There were no immediate reports of casualties.

In New Zealand, the emergency management agency issued an advisory on tsunami activity for the country's north and east coasts, forecasting strong and unusual currents and unpredictable surges along shorelines in those areas.

On Friday, the volcano sent ash, steam and gas up to 20 km into the air, Tonga Geological Services said in a Facebook post. It has a radius of 260 km.

A tsunami advisory was also in effect for the U.S. and Canadian Pacific coast, the Pacific Tsunami Warning Center in Honolulu said.

The National Weather Service said tsunami waves along the Oregon and southern Washington coast were expected imminently. High waves were reported in Alaska and Hawaii earlier.

In the San Francisco Bay Area of northern California, small parts of the cities of Berkeley and Albany near the bay were ordered to evacuate.