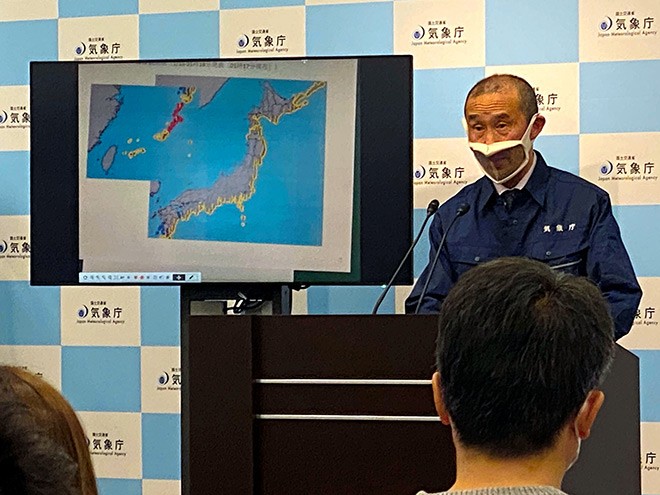 Kazuki Miyaoka, a senior official with the Meteorological Agency, briefs on sea-level changes off the Japanese archipelago caused by the eruption of an undersea volcano in Tonga in the South Pacific at an emergency news conference on Jan. 16. (Hidemasa Yoshizawa)

A massive underwater volcanic eruption near the South Pacific island nation of Tonga triggered surges in sea levels of up to 1.2 meters across a vast stretch of Japan’s Pacific coastline, prompting authorities to issue an early morning advisory for coastal residents to evacuate.

The advisory was issued shortly after midnight on Jan. 15 following the eruption of the Hunga Tonga-Hunga Ha’apai volcano about 7,700 kilometers south of Japan at around 1 p.m. the day before. The eruption caused plumes of smoke and ash to rise about 16,000 meters above the surface.

Waves of 1.2 meters hit Amami-Oshima Island in Kagoshima Prefecture, southern Kyushu, and measured 1.1 meters in Kuji, Iwate Prefecture, in the northeastern Tohoku region, according to the Japan Meteorological Agency.

The agency issued a tsunami warning, its first since November 2016 when an earthquake struck off Fukushima Prefecture.

As of 1:45 a.m., the evacuation order was in effect at 21 municipalities that involved 153,000 residents in Aomori, Iwate, Miyagi, Tokushima and Kochi prefectures, in addition to islanders in Kagoshima Prefecture.

The tsunami warning for the Amami and Tokara island chains in Kagoshima Prefecture was downgraded to an advisory at 7:30 a.m. on Jan. 16.

A 100-year-old woman was rushed to a hospital after she fell while evacuating to elevated land about 30 minutes after midnight in Amami, according to local authorities. Another island resident was also injured while he was evacuating.

One person suffered a minor injury while evacuating in Okinawa Prefecture, according to the Fire and Disaster Management Agency.

Unified university entrance exams being held across the nation had to be canceled at a venue in Miyako, Iwate Prefecture, as the area was covered by an evacuation order. A total of 195 test-takers were affected. They will be able to take the test on Jan. 30. It was the only venue where the test was canceled due to surging waters.

As of 7 p.m. on Jan. 15, the meteorological agency said it did not expect a tsunami to hit Japan although it cautioned that minor sea-level changes could occur due to the eruption.

But late into night, it revised its assessment and advised people to evacuate after recording significant changes in sea levels at many observatories.

During an emergency news conference early Jan. 16, the agency said the latest tidal surge was quite different from a typical tsunami generated by an offshore earthquake, noting that water levels surged as atmospheric pressure rose.

It also said it was the first time for Japan to experience changes in tidal levels as a result of a volcanic eruption overseas.