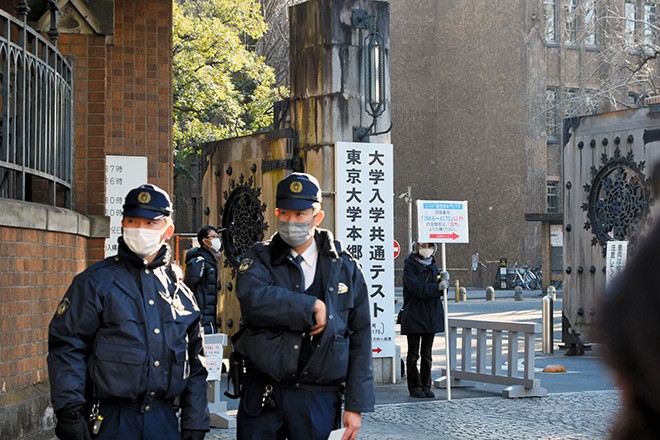 Police officers stand guard on a street near the campus of the University of Tokyo in the capital’s Bunkyo Ward on Jan. 16, a day after a stabbing spree that injured three people. (Ryo Oyama)

A high school student arrested after a stabbing spree in Tokyo that injured three people told police he went on the rampage because his grades weren’t up to scratch and his dream of enrolling at an elite national university and becoming a doctor were rapidly fading.

The 17-year-old boy was quoted by investigative sources as saying that he had hoped to attend the prestigious University of Tokyo to study medicine “but I lost confidence as my grades had not improved for the past year or so.”

The youth, a second-year student at a high school in Nagoya, central Japan, said he decided that “if I cannot become a doctor, I should commit hara-kiri (ritual suicide) after killing others and carrying the burden of guilt.”

The Jan. 15 incident occurred around 8:35 a.m. near the main campus of the University of Tokyo in Bunkyo Ward, one of hundreds of test venues for the nation’s unified university entrance exams held across the country that day. Jan. 15 was the first day of the two-day exams.

The boy was not among the test-takers and his victims, two students and a 72-year-old man who lives in the capital’s Toshima Ward, were total strangers.

His first victim was the elderly man, who had to be rushed to a hospital for surgery to treat his injuries. The youth then attacked a 17-year-old female student from Ichikawa, Chiba Prefecture, and an 18-year-old male student from Urayasu, also in Chiba Prefecture. They were attacked from behind and suffered back injuries, none of which were life-threatening, according to the sources.

Police said the attacks appeared to have been indiscriminate because the suspect knew none of the victims. The injured students were in town to take the test at the university, popularly known as Todai.

The youth used a kitchen knife with a 12-centimeter blade for the attacks, which he threw to the ground when security guards shouted at him.

He then sat on the ground and was arrested soon after by police officers who rushed to the scene.

He also had a knife with a 6-cm blade in his possession as well as a folding saw with a 21-cm blade, according to the sources.

The boy told investigators he brought the weapons from home and that he arrived in the capital earlier that morning after catching a night bus.

Police also discovered three plastic bottles and eight bottles containing what appeared to be a combustible liquid totaling about 3 liters in a bag that is believed to be his, according to the sources.

The bag was found at the crime scene. A fire starter was discovered nearby.

Officers also found 10 small bottles of nutritional supplements at the scene, nine of which were bundled into three, with three each. Some of the bottles contained fire starting agents.

The student is also suspected of starting a fire near the ticket gate at Todaimae Station on Tokyo Metro Co.’s Nanboku subway line minutes before the attack.

The station is situated about 100 meters from the scene.

The suspect hinted at his involvement, according to the sources.

Police are also investigating another incident in which liquid presumed to be combustible was sprayed inside a subway car traveling on the Nanboku Line prior to the stabbings. They want to determine if he was involved in that incident, too.

Suspicious fires occurred in at least eight locations that morning on the premises of Todaimae Station, the sources said.