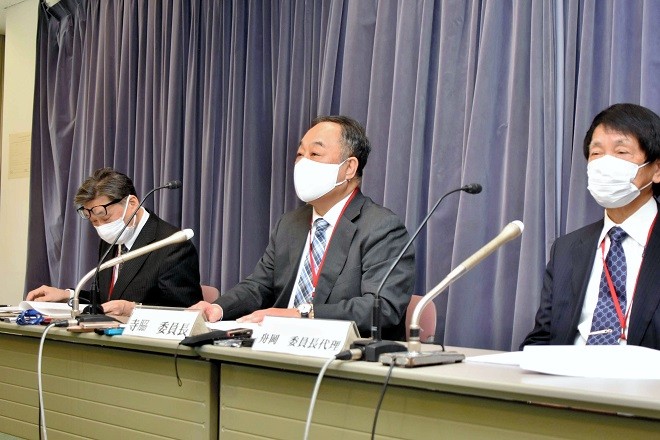 Panel members on Jan. 14 release the results of their investigation into shoddy statistics gathering at the infrastructure ministry. (Shinya Takagi)

Revelations about irregularities in the way the infrastructure ministry collected and compiled key construction data have delivered a devastating blow to the credibility of government statistics as a whole.

The facts have left no doubt that the ministry must take strong action to prevent a recurrence. But they have also underscored the need for a fundamental review of the entire government’s systems for compiling and reporting official statistics.

An independent fact-finding panel that looked into the ministry’s practice of rewriting statistics about construction orders received by construction companies, one of the 53 indicators defined as core barometers of the nation’s economic health, released its report on the inquiry on Jan. 14.

While concluding there was no evidence of deliberate efforts to inflate the data, the report nevertheless pointed out the ministry, out of fear of being held accountable for the statistical malfeasance, belittled the serious implications of the practice and avoided offering accurate explanations about the problem to the public.

The ministry compiles and publishes the statistics based on monthly reports submitted by 12,000 or so selected companies nationwide on construction orders they received during the month.

The problem concerns the ministry’s instructions to prefectural authorities in charge of collating the reports about what to do if a company failed to meet the deadline and later submitted reports for several months in a row.

Local government officials were told to tally the figures for those months and enter the total in the report for the latest reporting month. The officials erased the figures and rewrote them in pencil.

This practice resulted in double counting, starting with fiscal 2013, when the method for handling such cases was changed. The prefectural administration officials were told to use the average figure of all the companies that submitted reports instead of listing “zero” for each month lacking a figure. As a result, the data involving such cases were inflated.

The panel failed to find out why and how the practice of rewriting the data in certain cases started. But it surmised that the ministry adopted and continued, without thinking twice, the inappropriate way of compiling the statistics mainly to avoid wasting the data submitted later.

The ministry missed out on multiple opportunities to correct the problem and kept it under the carpet.

In June 2019, during a sweeping review to assess the credibility of official statistics conducted in response to the revelations of irregularities concerning monthly labor data used to calculate unemployment payouts and other social benefits, a rank-and-file bureaucrat at the infrastructure ministry suggested scrapping the double counting practice.

But the proposal was ignored by a reluctant superior.

After the Board of Audit in November 2019 pointed out the problems with the way the construction figures were tallied, the ministry in the following January instructed the local government officials involved to stop rewriting the data. Some ministry officials argued against adding up the figures for several months for the February construction data.

But the chief of the section responsible for the task adopted a compromise approach involving adding only the figure for the previous month to ensure no drastic decrease in the figures came to light due to the new collection method.

Consequently, the ministry continued to rewrite the monthly statistics with an eye to addressing the problem as part of another revision to the method of estimating the total in April 2021.

Even if the double counting resulted from the change in the method for handling cases of delayed reports from companies, as the panel says, the ministry’s actions to deal with the issue can only described as cover-up attempts.

The panel report pointed out the tendency of the bureaucracy to underestimate the importance of official statistics as a background factor. Given the statistics scandal involving the labor ministry, is it difficult to believe the problems behind the flawed construction data are unique to the infrastructure ministry.

The government’s statistical service has been plagued by a chronic manpower shortage and a lack of officials with expertise who understand all aspects of statistical work, from system designs to data collection.

The entire government needs to be committed to tackling these problems by developing expertise within the government and crafting an effective system to check the quality and accuracy of official statistics with the help of outside experts.

The panel’s probe into the inflated construction data has left key questions unanswered, including the effect on gross domestic product statistics.

Some critics are saying the infrastructure ministry officials responsible for the misconduct should be held responsible. The Diet should engage in all-out debate on the matter during this year’s regular session, which is to be convened on Jan. 17.