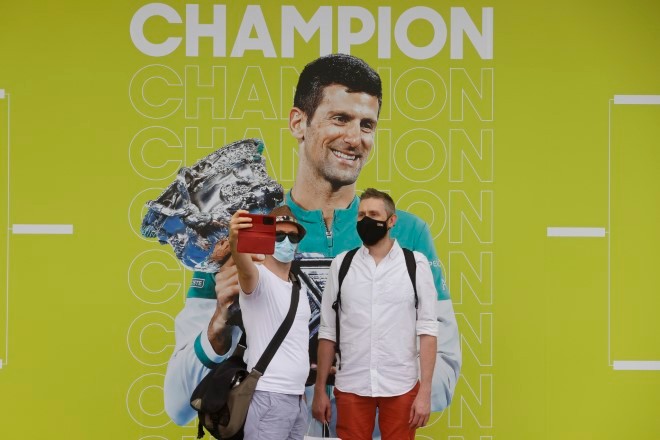 Fans take a selfie with a photo of defending champion Novak Djokovic of Serbia ahead of first round matches at the Australian Open tennis championships in Melbourne, Australia, Jan. 17. (AP Photo)

MELBOURNE--The Australian Open started Monday without nine-time champion Novak Djokovic and, finally, the focus was on forehands and backhands instead of his fight to avoid deportation because he isn’t vaccinated against COVID-19.

Fifth-seeded Maria Sakkari started the program on the main court at Melbourne Park with a 6-4, 7-6 (2) win over Tatjana Maria, with defending champion Naomi Osaka due next in Rod Laver Arena.

Later Monday, Rafael Nadal was set to renew his bid for a men’s-record 21st Grand Slam singles title with a first-round match against Marcos Giron of the U.S. Nadal is tied with Djokovic and Roger Federer with 20 major trophies.

Nadal won the Australian Open in 2009 and is the only past champion in the men’s bracket after Djokovic’s late withdrawal Sunday because he was forced to fly out of the country when a court upheld the cancellation of his visa. Federer is skipping the tournament to continue recovering from knee surgery.

Djokovic had been scheduled to play Monday night’s last match in Laver, following No. 1-ranked woman Ash Barty’s contest, but instead the 34-year-old Serb was on a flight that landed in Dubai.

The top-ranked Djokovic spent 11 days at the center of an unprecedented saga over his vaccination status, a stretch including two court hearings and time in immigration hotel detention before and after he won his first appeal.

It began when he was granted an exemption to strict vaccination rules by two medical panels and Tennis Australia in order to play in the Australian Open.

That exemption, based on evidence that he recently recovered from COVID-19, apparently allowed him to receive a visa to enter Australia. But upon arrival, border officials said the exemption was not valid and moved to deport him.

Showing evidence of vaccination is a requirement for anyone — players, coaches, fans, others — entering Melbourne Park for the tournament.

A security official with a loudspeaker reminded people lining up outside the complex early Monday to have proof of vaccination ready for inspection and added: “Oh, a ticket would be handy, too!”

Fans were taking photographs at the main stadium in front of an image of Djokovic holding up the trophy he won each of the past three years.