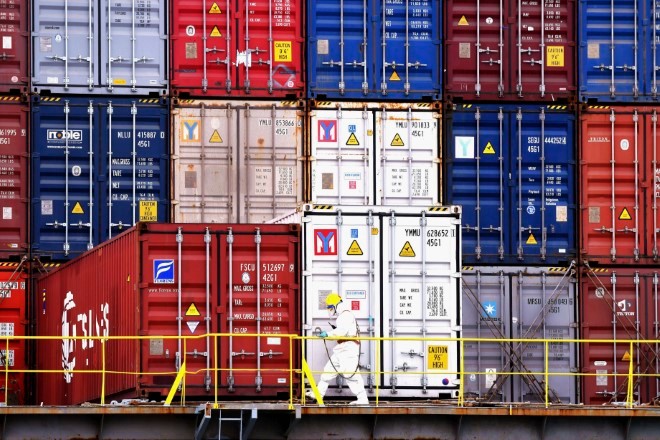 A worker in protective overall works near containers on a ship in Qingdao in east China’s Shandong province on Nov. 7, 2021. (Chinatopix via AP)

BEIJING--China’s economy grew by 8.1 percent in 2021 but Beijing faces pressure to shore up activity after an abrupt slowdown in the second half.

In the final three months of 2021, growth of the world’s second-largest economy sank to 4 percent over a year earlier, government data showed Monday. That was down from the previous quarter’s 4.9 percent and an eye-popping 18.3 percent in the first three months of 2021.

China rebounded quickly from the coronavirus pandemic, but activity slowed under pressure from Beijing for real estate developers to cut debt levels deemed to be dangerously high. That caused a slump in sales and construction, which supports millions of jobs.

The worsening weakness toward the end of 2021 is prompting suggestions Beijing needs to intervene to prop up growth with interest rate cuts or by injecting money into the economy through public works spending.

Shortly before the growth data were announced, the Chinese central bank on Monday announced a rate cut on medium-lending to commercial banks to its lowest level since 2020.

The recovery also has been hampered by coronavirus outbreaks that have prompted Chinese leaders to impose travel controls or outright lockdowns on cities including Tianjin, a manufacturing center.

Chinese exports, reported Friday, surged 29.9 percent in 2021 over the previous year despite a global shortage of semiconductors needed to make smartphones and other goods and power rationing imposed in major manufacturing areas.