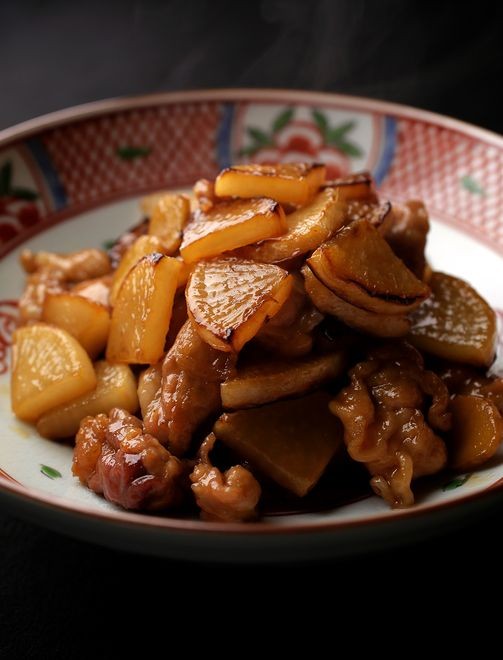 At this time of the year, vegetables growing in the fields are bearing the cold weather just like we are.

Leafy and root winter vegetables are sweet and soft and can be good for your health when eaten in generous amounts. Cooking expert Setsuko Sugimoto will shed light on these two top winter vegetables, the daikon radish and turnip, in a four-part series.

First in the series is “buta-koma daikon” (pork slice bits and daikon), which goes well with rice. It is a filling dish that is easy to cook in a frying pan.

Simmered daikon is often associated with the “oden” hotpot where it is cooked for a long time. But this time, the daikon is sliced unpeeled and cooked for only 15 minutes and turns out suitably textured yet juicy. It is a good way to use the tip part of the daikon that is hard to eat uncooked.

The key to the recipe is pan-frying the daikon, which gives it a toasty flavor, instead of parboiling it. This way, it becomes mouthwatering and has a presence that even rivals the pork.

The arranged version is a stir-fry you can make when you have bought daikon with leaves. Stir-fried with “jako” (tiny young fish cooked in salted water and dried), the leaves turn it into a mildly flavored moist dish. And it feels good to use up all the ingredients. The dish can be cooked the same way with turnip leaves.

NEW KINDS OF DAIKON BEING DEVELOPED

The cookery science aspect of the series is supervised by professor Yasujiro Morimitsu at Ochanomizu University. He conducts research on the functional components of food and develops new varieties of vegetables with experts on breeding.

The aim is to increase consumption by giving the vegetables new characteristics, such as reducing the smell that is disliked by some people or increasing favorable nutrients. The “kodomo piman,” literally “children’s green pepper,” which does not taste bitter even when eaten fresh, is popular with adults as well.

One newly developed daikon variety has less of an odor during processing and remains white long after. Although the study began to remedy the fact that people shy away from buying “takuan” (pickled daikon) due to its smell, the new daikon is also in demand as an ingredient for commercially available dressing containing grated daikon as well as for vegetable juices.

1. Cut unpeeled daikon into rounds that are 7 to 8 mm thick. Stack 3 or 4 pieces and cut into quadrants (PHOTO A). Finely slice unpeeled ginger.

2. Spread pork slices in a flat container, sprinkle with bit of salt and pepper. Sprinkle flour all over to dust the meat. Flour will improve the mouthfeel of the meat and thicken the simmering liquid.

3. In frying pan, heat cooking oil and sesame oil for flavor, lay daikon pieces. Cook for 2 to 3 minutes over medium-high heat. Turn when brown on one side (PHOTO B) and cook the same way. Move daikon slices to the side in the frying pan to make room, add pork and spread with chopsticks and then add ginger. Turn pork once one side has browned.

4. Add sake and cook out the alcohol, then add water, sugar, sweet mirin sake and soy sauce. Place lid and simmer on medium heat for 4 to 5 minutes (PHOTO C). Turn sides of daikon and pork midway. In the final stage, remove lid, mix and cook out water in the simmering liquid to add glaze.

Setsuko Sugimoto is a Kyoto-based cooking expert who explores the culinary culture of the historical capital.
Yasujiro Morimitsu is a professor at Ochanomizu University specializing in the functional components of food.

Cut 300 grams daikon (or turnip) leaves into a size that fits the pot and boil. Remove and immerse in cold water. Squeeze out water and finely chop. Heat 2 Tbsp oil in frying pan and lightly cook 40 grams “chirimen-jako.” Add daikon leaves, 1 Tbsp each of sake and light-colored soy sauce, 2 tsp sugar and stir-fry until some liquid remains.

The part toward the tip of the daikon is hard in texture while the part near the leaves is soft because of the difference in the size of its cells. Since the root growing in the soil thickens, the cells toward the tip remain small and dense, while the cells near the leaves grow and contain more water. When grated, the tip is highly pungent since the enzymes that create the pungency are found more near the skin.