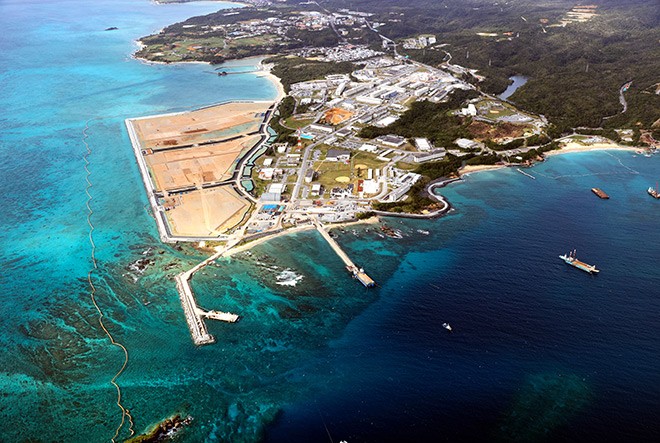 Land reclamation work for the construction of a U.S. military base has been on hold since a weak seabed was discovered off the Henoko district of Nago, Okinawa Prefecture. (Asahi Shimbun file photo)

NAGO, Okinawa Prefecture--Official campaigning started Jan. 16 for the mayor race here, the first in a series of elections centered on a familiar topic: the relocation of a U.S. military base within the prefecture.

Taketoyo Toguchi, the incumbent backed by the central government, and Yohei Kishimoto, a newcomer endorsed by the opposition bloc, will battle for the mayor’s post in the Jan. 23 election.

It will be the seventh mayoral election since the central government announced plans to move the U.S. Marine Corps Air Station Futenma in Ginowan in Okinawa Prefecture to an offshore site in the Henoko district of Nago.

Although Toguchi, 60, is supported by the central government, he has remained mum on the base relocation issue.

Instead, Toguchi is trying to woo voters by promoting programs funded by state grants given to municipalities that cooperate with the hosting of U.S. military facilities.

“I intend to create a path to secure financial resources for Nago’s development,” he said in a speech on the first day of campaigning.

Toguchi boasted of the city’s free school lunch programs and free nursery schools as his accomplishments since he was elected mayor for the first time four years ago.

The central government started land reclamation work for the new base in 2018 after that election.

In that race as well, Toguchi remained silent about the base issue.

The Toguchi camp’s strategy--again--is to focus attention on programs that help the daily living of residents and prevent the Futenma relocation issue from taking center stage.

“I believe that few Okinawans are in favor of hosting U.S. bases,” an official with his camp said. “But islanders also feel that it is now impossible to stop the project.”

Kishimoto, a former member of the Nago city assembly, is bringing his opposition to the relocation plan to the fore of his campaign.

“I am determined to block the project by unseating the mayor,” he said on Jan. 16.

But even one official in the Kishimoto camp acknowledged that the central government is unlikely to backtrack on the U.S. base project, even after a weak seabed was discovered in the planned construction site.

“Still, we should reassert our opposition as residents of Nago to drum up support for the anti-U.S. base movement in the prefecture,” the official said.

Okinawa Governor Denny Tamaki, who also opposes the Henoko project, was with Kishimoto, 49, when the candidate hit the campaign trail.

Tamaki faces re-election in autumn, the most crucial of a string of elections scheduled in Japan’s southernmost prefecture this year concerning the fate of the project.

An Upper House election is expected to be held in the summer. Mayoral races are also scheduled for Okinawa city, Ginowan and the prefectural capital of Naha this year, which marks the 50th anniversary of Okinawa's return to Japan.

In November last year, Tamaki rejected the central government’s application for a change in the design of the land reclamation work. It was described as Tamaki’s “last remaining card” to halt the project.

“The central government is bulldozing its way with the project that is not going well,” Tamaki said on Jan. 16. “We have to raise our voices for our future.”

Another issue for the mayoral election will be the rapid spread of novel coronavirus infections in the prefecture.

Both camps are grumbling that the public health crisis has made it next to impossible to hold public rallies.

The Kishimoto side hopes to use the COVID-19 issue to further highlight the burden placed on Okinawa Prefecture from hosting a disproportionate share of U.S. bases in Japan.

The prefecture has had the most infections per capita in Japan over the weeks since the Omicron variant apparently spilled from U.S. bases to residents in mid-December.

U.S. military personnel arriving in Japan are exempt from the Japanese government’s quarantine rules under the Japan-U.S. Status of Forces Agreement, a pact that islanders have long criticized as unfair.

“Amid the pandemic, Okinawans are feeling afresh damages stemming from U.S. bases,” said a senior official with the Kishimoto camp. “We are trying to increase momentum toward a fresh look at the Henoko question.”