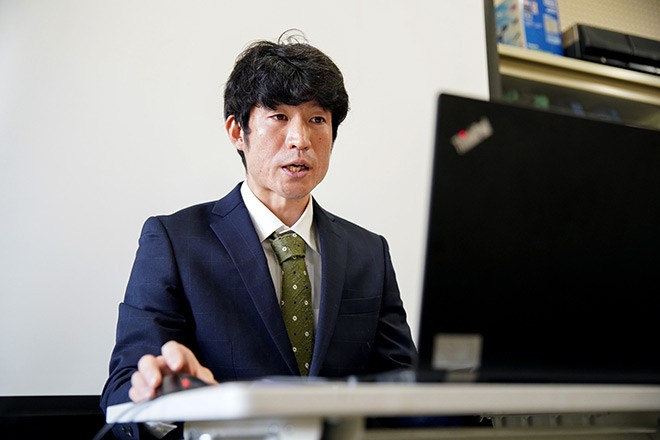 Genki Hasegawa speaks to pupils during an online meeting on the 1995 Great Hanshin Earthquake on Jan. 17 in Kobe’s Suma Ward. (Takuya Tanabe)

It took Genki Hasegawa about 10 years before he felt ready to publicly describe his experience of losing loved ones in a disaster, and the nightmares, tears and feelings of regret that followed.

Now 35, Hasegawa, on the 27th anniversary of the 1995 Great Hanshin Earthquake, renewed his pledge to keep victims’ stories alive for future generations.

He is the new leader of Kataribe Kobe 1995, a group of quake-related storytellers. Hasegawa joined the group in 2014 and belongs to the “last generation who have direct knowledge of the earthquake.”

Hasegawa was 8 years old when the early morning quake struck on Jan. 17, 1995. He was asleep with four other family members at their two-story wooden home in Kobe’s Higashi-Nada Ward.

Shortly before the quake struck, Hasegawa woke up to go to the bathroom. As he returned to his bed, he felt an upward thrust that broke a pillar and caused the roof to collapse.

He repeatedly yelled for his mother but did not get a response.

In the dark, he knocked down a wall and got outside. He and a younger brother, one year his junior, went to a nearby park and sat on a bench.

They waited for their mother, Noriko, 34, and another younger brother, Shoto, who was 16 months old.

Their father arrived and told the two boys that Noriko and Shoto had died under a collapsed wardrobe.

Hasegawa said his mother had a warm personality but was also a strict disciplinarian. When he did not finish a meal or fought with his younger brothers, Noriko would scold him.

He also said Shoto always smiled and would unfailingly kick back a ball sent in his direction by Hasegawa.

Noriko once saw them playing and said with a smile, “Shoto is promising.”

After the quake, Hasegawa had a repeated dream with scenes of the family’s pre-quake daily life about twice a week until he graduated from elementary school.

In the dream, he thought, “Ah, the quake was just a dream.” When he woke up to reality, tears fell from his eyes.

When he heard his classmates talk about their mothers, Hasegawa’s chest grew tight, and he would go to a corner of the schoolyard to cry.

His homeroom teacher stroked his back and said, “It’s all right.” That experience led to Hasegawa’s dream to become a teacher.

When he was a university student, he discussed his quake experience for the first time in front of many people. Encouraged by his junior high school teacher, Hasegawa spoke to children at his alma mater.

Although it felt “heavy” for him to remember the quake, he also felt a warmness from the sincere expressions on the students’ faces.

After becoming a teacher, Hasegawa talked about the quake at an elementary school.

That talk led to an invitation to join Kataribe Kobe 1995.

The group, established in 2005, has held about 200 storytelling events over 17 years.

Its main member is Katsutaro Tamura, 80, who survived the quake when he was an elementary school teacher in Ashiya, Hyogo Prefecture.

Tamura was concerned that the aging group would be unable to continue passing down memories of the disaster, so he handed over the baton, and the group’s chairman position, to Hasegawa.

The group has gone through a generational change.

Five of its current seven members are in their 20s and 30s, including one who was born on the day of the quake.

They have talked not only about their experiences but also the knowledge and lessons about disaster prevention they have learned in Japan and abroad.

Hasegawa’s first child, a daughter, was born two years ago.

As a father, Hasegawa said he sometimes feels pangs of regret that he wasn’t kinder to his mother and that he should have played more with Shoto.

He said he does not want children to have such feelings.

On the morning of Jan. 17, Hasegawa spoke to pupils at Kobe City’s Wakamiya Elementary School where he works.

“It is not a given that your loved ones will always be there with you,” he said. “You should convey your thankfulness for the smallest things.”

He said he is determined to keep telling the quake stories so that children can think about disaster prevention as their own problem.