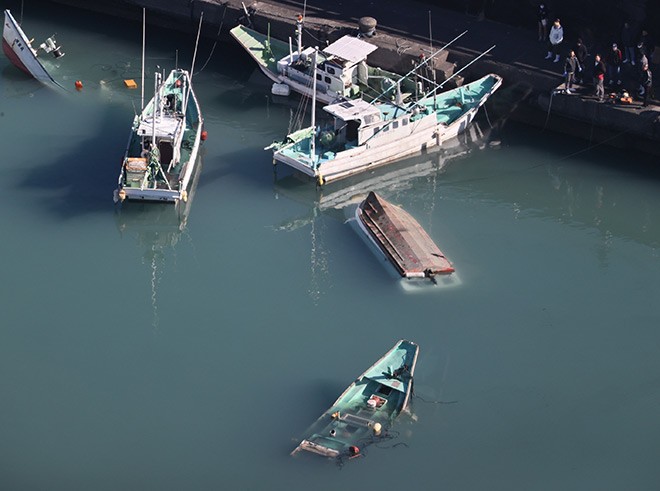 It was the first time that an underwater volcanic eruption abroad caused surges in the sea level that affected Japan.

The Japan Meteorological Agency was forced to make decisions on public warnings that differed from ones made in the event of a tsunami.

A little after 7 p.m. on Jan. 15, about six hours after the eruption near the Tonga islands, the meteorological agency announced that “there is no need to worry about tsunami danger” although it predicted slight fluctuations in the sea level.

The JMA expected that the small tidal level changes would occur at Chichijima island, part of the Ogasawara island chain south of Tokyo, around 10:30 p.m.

But tidal level changes started to be observed at various locations across Japan from around 8 p.m., two and a half hours earlier than expected.

Just before 12 a.m. on Jan. 16, increases of more than one meter in the sea level were observed in Amami city, located on the island of Amami-Oshima island, in Kagoshima Prefecture.

The JMA issued tsunami warnings and advisories at 12:15 a.m. for coastal areas.

Tsunami warnings are normally issued after tsunami heights and arrival times are predicted based on an earthquake scale, location of the epicenter and its depth of focus.

But this time, the JMA issued its warnings based on data recorded at tidal observatories at various locations.

It was extremely difficult for the JMA to make an assessment.

“It took longer to make decisions, but we issued warnings from the perspective of disaster prevention,” said Kazuki Miyaoka, the JMA's senior coordinator for seismological information, at a news conference in the early morning of Jan. 16. “We think that this time the tidal level changes were different from normal tsunami.”

A tsunami usually emanates from an eruption location, but small tidal level changes, ranging from 0.1 meters to 0.3 meters, were observed at Saipan, a commonwealth of the United States, and elsewhere, much closer to the Tonga islands than Japan.

Japan is located about 8,000 kilometers from the eruption area, but saw bigger tidal level changes along its shores.

The JMA revealed that at almost the same time as the changes in tidal levels started, the eruption’s shock waves passed through various locations, increasing atmospheric pressure by two hectopascals or so.

Miyaoka said whether increases in atmospheric pressure were related to the tidal level changes is unclear, but commented, “We have never observed such a phenomenon.”

Taro Kakinuma, an associate professor of tsunami and coastal engineering at Kagoshima University, pointed out that changes in atmospheric pressure could amplify waves on the sea surface.

According to Kakinuma, there are reports that tsunami due to atmospheric pressure changes were observed in California in the United States and elsewhere after the massive 1883 Krakatau eruption in Indonesia.

Fumihiko Imamura, a professor of tsunami engineering and the head of Tohoku University’s International Research Institute of Disaster Science, also suggested the shock waves might have changed the tidal levels.

A tsunami normally occurs in a cycle of 20 minutes to a duration of one hour, but this time the cycle was as short as a few minutes to 10 minutes or so.

“Changes in atmospheric pressure push the surface of the sea and after they pass through, the sea surface rises, causing high waves,” Imamura said. “The waves could have been amplified gradually by the time when they reached Japan.”

(This article was written by Hidemasa Yoshizawa and Takahiro Takenouchi.)