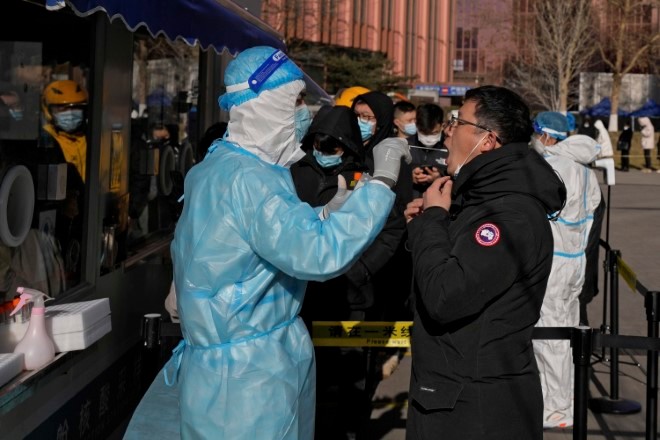 A man gets a swab for the COVID-19 test to meet traveling requirements at a mobile coronavirus testing facility outside a commercial office building in Beijing, Jan. 16. (AP Photo)

BEIJING--Beijing’s first reported case of the Omicron variant has prompted stepped-up measures in the nation’s capital, just weeks before it hosts the Winter Olympic Games.

Following the positive test announced Saturday, more than 13,000 people and all places visited by the patient over the previous days have been tested, according to state media. The person’s apartment complex and workplace have been sealed off.

The infected person lives and works in the city’s northwestern district of Haidian and had no travel history outside of Beijing for the past two weeks, according to state media.

State media on Monday reported the capital, with its 20 million residents, was considering stronger restrictions on travel. All transit links with Tianjin have already been severed. International flights have been sharply reduced and domestic travelers have been barred if they transferred to a second location before arriving in Beijing.

No new cases were reported in Beijing on Monday, although the nearby city of Tianjin saw another 80 cases recorded over the previous 24 hours.

The Olympics open on Feb. 4, just days after the start of Lunar New Year celebrations. Athletes, officials, staff and journalists are required to enter a closed-loop bubble without outside contact and undergo daily testing.

Beijing Daily reported Sunday that the capital will require travelers to take nucleic acid tests within 72 hours of entry starting Jan. 22. Some schools in Beijing have also closed early and moved classes online ahead of the winter holidays.

Officials across the country also urged residents to stay in their cities for the new year, instead of traveling back to their hometowns. Tourist sites, including sections of the Great Wall, have also closed amid China’s “zero-COVID” policy that has seen millions of people placed under lockdowns.

The economic, logistical and psychological stresses resulting from that policy have become increasingly apparent, creating tension over how long the restrictions must remain in place.

Following three weeks of isolation, the ancient capital of Xi’an appeared to be turning a corner, with stay-at-home rules lifted on neighborhoods determined to be virus-free.

Roughly 1,000 kilometers southwest of Beijing, the city of Xi’an, which has a population of 13 million and counts as a major tourist site for its famed Terracotta Warriors, has reported over 2,000 infections since December last year.