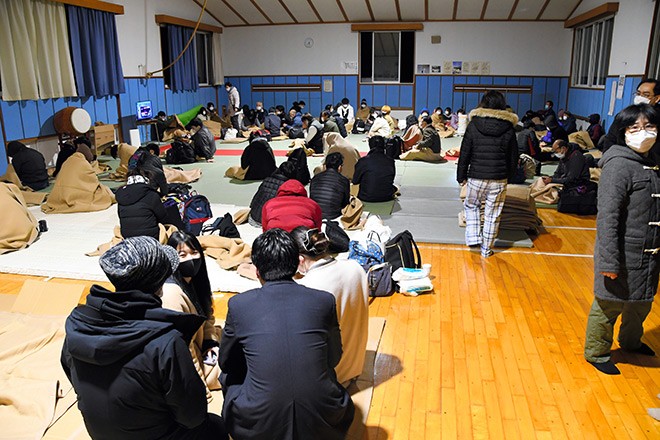 Evacuees at the municipal Kanan Junior High School in Miyako, Iwate Prefecture, cover themselves with blankets as the windows and doors are kept open as a precaution against the novel coronavirus on Jan. 16. (Akina Nishi)

Tsunami warnings and advisories issued in the early morning hours of Jan. 16 brought back memories of the 2011 tsunami to startled residents of disaster-hit areas in northeastern Japan.

“I was surprised at hearing a siren because I didn’t feel any jolt,” said Taichi Endo, a company employee who evacuated with his son to Mount Hiyoriyama in central Ishinomaki, Miyagi Prefecture.

The Japan Meteorological Agency issued a tsunami advisory at 12:15 a.m. on Jan. 16, roughly 11 hours after the eruption of the Hunga Tonga-Hunga Ha’apai volcano, about 7,700 kilometers south of Japan.

When a previous advisory was issued in November 2016 following an earthquake that struck off Fukushima Prefecture, Endo said, he was able to brace for an ensuing tsunami.

But a siren blared out in the early hours of Jan. 16 despite no earthquake being felt.

An evacuation center was set up at the municipal gymnasium about 25 minutes after the tsunami advisory was issued.

“There was no major confusion thanks to our regular drills,” said a city official. “But I was surprised because we’ve never done this following (the eruption of) a volcano.”

Kenta Sato, 35, who works at a hotel in Kesennuma, Miyagi Prefecture, evacuated to a civic hall in the city with his four family members.

“I remember the 2011 disaster, so I evacuated with emergency bags as soon as I heard a siren,” said Sato, who lost his parents’ home in the tsunami on March 11, 2011, spawned by the Great East Japan Earthquake.

“Many of my acquaintances died in the tsunami,” said his 58-year-old mother, Kaori. “Many of my neighbors had yet to flee their homes, but it’s best to evacuate when you have no idea what’s going on.”

It was the first time a tsunami warning was issued for Iwate Prefecture since the 2011 disaster.

Staff at a hotel facing the Pacific Ocean in Miyako in the prefecture showed guests the way to higher ground at the back of the facility.

Yuichi Washio, 36, a company employee who was staying at the hotel on a business trip, spent about two and a half hours waiting on a mountain trail in pitch darkness. He moved to the gymnasium of the municipal Kanan Junior High School shortly before 5 a.m.

Some 120 evacuees, many of whom were hotel guests, had to fight to stay warm since the windows and doors of the gymnasium were kept open as a precaution against the novel coronavirus.

“I felt the need to take measures against the cold in a disaster,” said Washio. “I learned a good lesson.”