One month on, arson attack still haunts the minds of Osaka locals 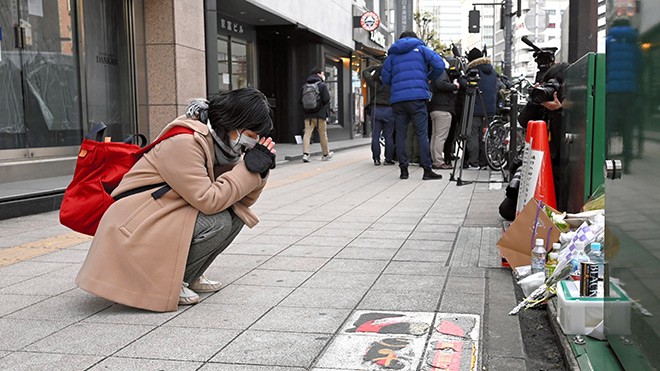 A mourner prays for the victims one month after an arson attack killed 25 people in Osaka’s Kita Ward on Jan. 17. (Nobuhiro Shirai)

OSAKA--On the one-month anniversary of the arson attack at a mental health clinic in Kita Ward that claimed 25 lives, mourners visited the building from the early morning to pray for the dead.

At around 9 a.m. on Jan. 17, a 49-year-old man who runs a company located nearby that provides support for people with disabilities put his hands together in prayer in front of the building.

Someone who had used his company’s services was among those killed in the attack.

“I was shocked because he was killed while he felt scared," he said. "He was a very hard-working man. This is just so sad and regrettable.”

At around 10 a.m., a 67-year-old man residing in Kita Ward with no occupation offered a silent prayer for the victims.

“I just can’t feel that the clinic’s patients were total strangers to me because I myself have experienced mental illness,” he said. “I pray that they rest in peace.”

Jan. 17 marks a month since the attack, but not a day has gone by without bouquets of flowers gracing the outside of the multitenant building where the clinic was located to mourn the victims.

Kotaro Nishizawa, 49, the head of the clinic, along with staff and patients, were killed in the attack.

The clinic was situated in the Kitashinchi entertainment district. The Kitashinchi Syakou Ryouin Kyoukai, an association of 4,500 bars and nightclubs in the district, left a bouquet of flowers at the building three days after the attack.

“I think everyone in Kitashinchi feel sad and finds it hard to understand why the attack happened,” said Koichi Toshioka, 70, the chairman of the association, who also runs a bar in the district.

A 46-year-old woman who runs a nearby bar said she wanted an explanation from the suspect, but he died after the attack from his injuries.

“I wanted him to explain why he did this," she said. "One month has passed, but not knowing the reason this happened, I’m still upset.”