VOX POPULI: Tonga volcano eruption reminds that we all live on the same Earth 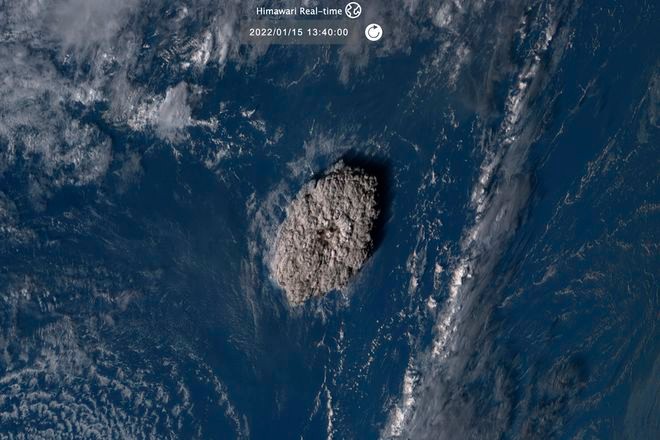 This satellite image taken by Himawari-8, a Japanese weather satellite operated by the Japan Meteorological Agency and released by the National Institute of Information and Communications Technology (NICT), shows an undersea volcano eruption at the Pacific nation of Tonga on Jan. 15. (NICT via AP)

The volcanic eruption of Mount Fuji in 1707 was violent enough to impact the then-Japanese capital of Edo 100 kilometers away.

Confucianist scholar Hakuseki Arai (1657-1725) noted in his autobiographical work "Oritaku Shiba no Ki" (translated into English as "Told Around a Brushwood Fire") that as the earth kept rumbling and shaking, volcanic ash resembling snow blanketed the ground and turned the vegetation chalk white.

Dusk reigned during the day and lamps had to be lit. Many people suffered from coughing, apparently having inhaled the ash.

With the situation so dire even in faraway Edo, one can only try to imagine how much worse it must have been at the foot of Fuji, where volcanic rock fragments rained down.

The force of the Jan. 15 eruption of an undersea volcano near the Tonga islands in the South Pacific was said to have been similar to, or slightly greater than, that of the 1707 event.

The volcanic ash and gas plume reached the stratosphere. Tsunami were reported 8,000 km away in Japan, as well as in the United States and Latin America.

Experts say volcanic pumice may reach the Pacific coast of those parts of the world in the days ahead.

The extent of the damage done to the Tonga islands is a matter of grave concern. But with the near-total disruption of communication, the situation remains unknown.

The internet may cover the entire globe, but there can be no connection if the undersea cables have been damaged.

Aircraft bringing relief supplies have apparently not reached the islands yet. This is so frustrating.

The kingdom of Tonga was one of the nations that contributed donations to Japan in the aftermath of the Great East Japan Earthquake of March 2011. Some members of Japan's national rugby team are Tongans.

A review of the history of volcanic eruptions over the last 200 to 300 years reveals multiple instances of volcanic ash blocking sunlight after catastrophic events and causing cold weather damage.

It is feared that the latest event, too, may negatively impact the global climate.

The Earth is wailing from the middle of the South Pacific.