A Vietnamese technical intern who was exposed to violence at a construction company in Okayama. The intern said he was subjected to two years of physical abuse by Japanese workers. (Provided by Fukuyama Union Tanpopo) 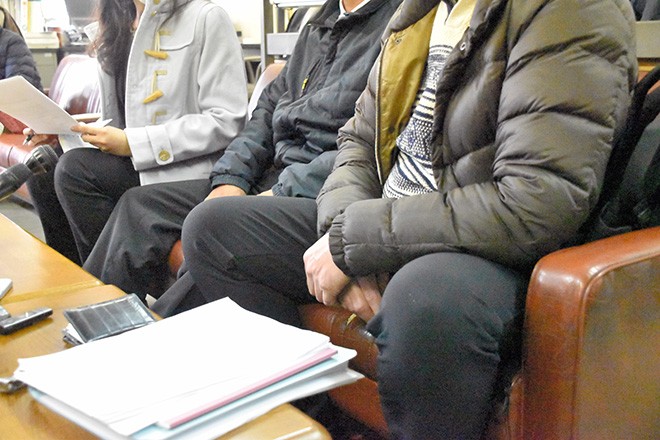 The Vietnamese technical intern, center, during a news conference in Okayama on Jan. 17 (Takashi Yoshikawa)

OKAYAMA--A Vietnamese technical intern who says he was subjected to violent abuse while working at a construction company here is seeking an apology and compensation from his former employer as well as the supervising organization that arranged the placement.

The matter was raised Jan. 17 by a labor union based in Fukuyama, Hiroshima Prefecture, during a news conference in Okayama.

The Fukuyama Union Tanpopo said it has reported the mistreatment of the Vietnamese worker to the Organization for Technical Intern Training, a Tokyo-based body that supervises training programs for foreign workers.

According to the union, the 41-year-old Vietnamese national came to Japan in fall 2019 and soon began working in the construction industry in Okayama, mainly helping to erect scaffolding at construction sites.

But about a month into the job, three Japanese colleagues started to physically abuse him. He was repeatedly struck on the back and waist with a broom or a rod-shaped object, the union said.

He was also kicked so violently that he fractured three ribs. The attack, by workers wearing protective footwear, focused on the left side of the man’s s chest area.

When the man reported the incident to the company, he was advised to pretend he had “fallen down the stairs.”

In June 2021, the man contacted the local industrial technique cooperative association that initially found him the job for help in ending the assaults.

A Vietnamese acquaintance then advised him to consult with the union, which provided the man with safe shelter in October 2021.

The union has been holding discussions with the company and the cooperative association on the man’s behalf and is requesting an apology and compensation.

However, the company maintains that no violence took place and the man’s injury was due to an accident, the union said.

The company and the cooperative association declined to comment when contacted by The Asahi Shimbun.

“I had thought Japan would be a safe and kind country,” the man said during the news conference while unable to hold back his tears.

He said he “had endured (the violence) for so long, thinking about my wife and daughter I left behind in Vietnam.”

The man said he is still paying back about 1 million yen ($8,710) he incurred in debt to work in Japan and wants to make a fresh start with a different company.