11 prefectures to be added to those in pre-emergency measures 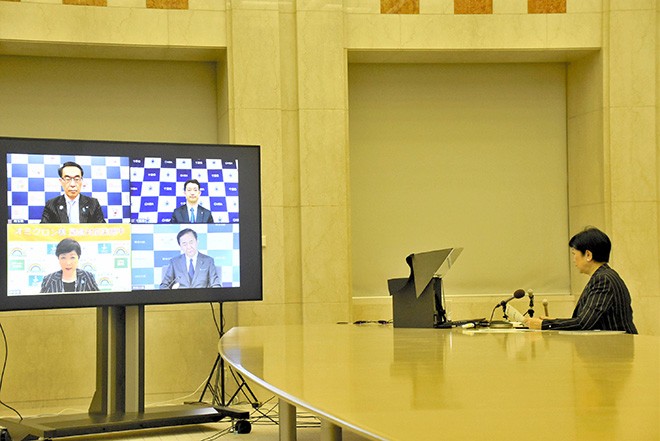 The governors of Tokyo and neighboring Saitama, Chiba and Kanagawa prefectures hold a video conference on Jan. 17. (Shin Kasahara)

The central government is preparing to expand COVID-19 pre-emergency measures to 11 prefectures amid a rapid surge in cases of the Omicron variant, according to sources.

The central government is expected to discuss the matter at a meeting of relevant Cabinet ministers on Jan. 18 and consult with experts the next day before making an official decision.

The government is considering placing the 11 prefectures under pre-emergency measures for roughly three weeks, from Jan. 21 through Feb. 13.

At a video conference on Jan. 17, the governors of Tokyo and neighboring Saitama, Chiba and Kanagawa prefectures shared concerns that a continuing surge in cases could overwhelm the health care system and undermine other social infrastructure.

They later asked the central government to apply the pre-emergency measures to their respective areas.

“Tokyo and the three prefectures will cooperate with each other in quickly compiling measures to tackle the issue together,” said Tokyo Governor Yuriko Koike.

Chiba Governor Toshihito Kumagai indicated on Jan. 17 that his prefecture will ask bars and restaurants certified by the prefectural government to shorten their operating hours, but it will not urge them to stop serving alcohol.

Saitama Prefecture is also considering allowing eating and drinking establishments to continue serving alcohol under certain conditions, including using a program to ease anti-virus restrictions for those vaccinated against COVID-19 or for people who have tested negative for the virus.

The governors of Aichi, Gifu and Mie prefectures also agreed at a separate online meeting they would make a joint request to the central government to place their jurisdictions under pre-emergency measures.

The daily number of new COVID-19 cases nationwide has topped 20,000 for the fourth straight day since Jan. 14, reaching almost the same level as at the peak of the fifth wave of infections.

Tokyo announced its new guidelines for anti-virus measures on Jan. 13, when it confirmed 3,124 new cases, the highest number in the nation.

The metropolitan government will consider asking the central government to apply pre-emergency measures to the capital if its hospital bed occupancy rate reaches 20 percent and issue a COVID-19 state of emergency if the rate reaches 50 percent.