Kishida to form new group to take on nuclear-free goal 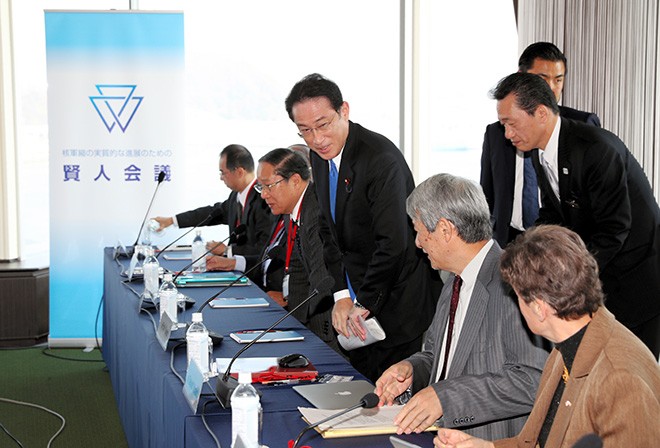 Fumio Kishida, then the chair of the ruling Liberal Democratic Party’s Policy Research Council, speaks at a meeting of a group of eminent persons for substantive advancement of nuclear disarmament held in Hiroshima’s Minami Ward on Nov. 27, 2017. (Koichi Ueda)

Prime Minister Fumio Kishida declared he will set up an international group of “eminent persons” to achieve his dream of a world free of nuclear weapons.

He made the announcement Jan. 17 during a policy speech in the Diet.

Kishida said he hoped the group will convene its first meeting in Hiroshima Prefecture within this year.

His aim is to gather current and former political leaders from both nuclear states and non-nuclear states to move forward on dialogue toward nuclear disarmament.

Kishida, whose constituency is in Hiroshima Prefecture, has long advocated nuclear disarmament.

He had also intended to attend the Review Conference of the Parties to the Treaty on the Non-Proliferation of Nuclear Weapons due to be held this month in the United States that was called off because of the COVID-19 pandemic.

In 2016, as foreign minister, Kishida helped to organize President Barack Obama’s visit to Hiroshima Prefecture. It marked the first visit to Hiroshima by an incumbent U.S. president at a memorial event on the anniversary of the city’s Aug. 6, 1945, atomic bombing.

Kishida, when he was foreign minister, also set up a group of eminent persons tasked with “substantive advancement of nuclear disarmament.” Its members, which include university professors from the United States and China, have been discussing related issues since 2017.

The formation of the new group was the primary topic that Kishida wanted to emphasize in his policy speech, according to a source in the prime minister’s office.

Discussions on the makeup of the body will be held shortly. Senior officials of the prime minister’s office are hoping that Obama will agree to join the group.

While the government has no intention of signing the Treaty on the Prohibition of Nuclear Weapons due to its defense posture of relying on the U.S. nuclear umbrella, it wants, by launching the international group of eminent persons, to assume the role of a bridge between nuclear states and non-nuclear states.

Given that the existing group struggled to sum up the members’ opinions and make its views clear, it remains to be seen if Kishida’s latest initiative will have more luck.