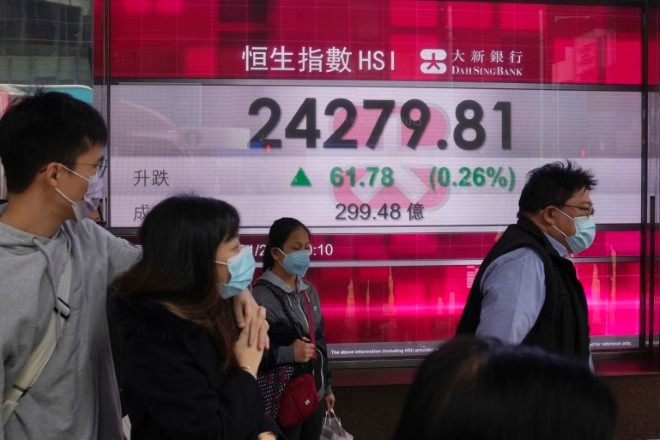 Asian shares were mostly higher Tuesday in the absence of big market-moving news following a national holiday in the U.S.

The Bank of Japan wrapped up a two-day policy meeting with no major changes. The benchmark interest rate remains at a longstanding minus 0.1 percent.

Japan’s central bank’s super-easy monetary policy had been expected to stay unchanged for the time being, as the nation grapples with surging cases of COVID infections set off by the omicron variant.

The recent sudden increase in reported cases is likely to crimp economic activity. Japan, which has not had any lockdowns, has gone through periods of restrictions to curb the spread of COVID-19, mostly having restaurants and bars close early. Such restrictions are expected to expand this week to about a third of the nation, including Tokyo.

Asia has lagged the West in vaccine boosters. About 80 percent of the Japanese population, for instance, have received two shots, and about 1 percent the third inoculation.

Signs of inflation are also worrying policy makers. Price increases in Japan have been less pronounced than it is in the U.S. and some other nations, though the central bank raised its inflation forecast for the fiscal year that begins in April to 1.1 percent from a previous estimate of 0.9 percent.

Earlier this week, China reported its economy expanded at an 8.1 percent annual pace in 2021. The weakness in China's economy toward the end of 2021 has set off suggestions Beijing should prop up growth with interest rate cuts or public works spending.

“Overall sentiments may still lean towards some cautiousness, as some market participants may refrain from taking on more risks. This comes amid a quiet U.S. calendar ahead and the absence of comments from Fed officials going into the FOMC meeting next week,” said Yeap Jun Rong, market strategist at IG in Singapore.

Brent crude, the international standard, added 95 cents to $87.43 a barrel.