Kishida: Dealing with Omicron variant of virus is top priority 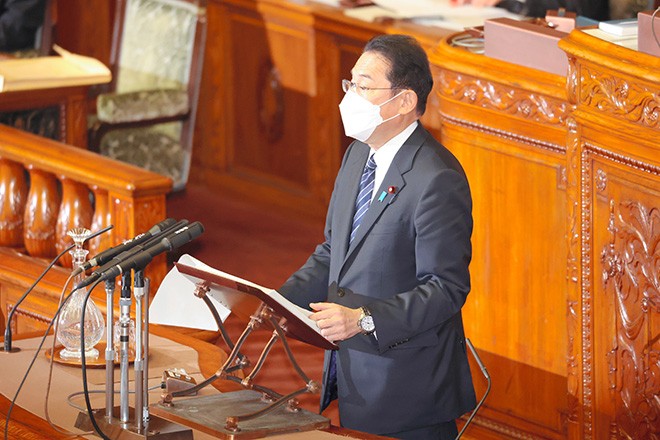 In his speech to both chambers of the Diet on Jan. 17, Kishida said emphasis will move toward ensuring the domestic medical care structure is not placed under undue pressure from the recent surge on infections, particularly with the Omicron variant.

“Without becoming excessively fearful, I am prepared to deal with it in a calm manner based on the latest scientific knowledge,” Kishida said.

He said efforts would be made to accelerate booster shots and strengthen the medical care structure, but he noted that many things were still unknown about the Omicron variant.

To stave off criticism from the opposition, Kishida apologized over a recent third-party investigation that concluded infrastructure ministry officials tried to conceal the long period of shoddy gathering of construction contract statistics.

“I sincerely accept the results of that investigation and would like to extend my apology to the public,” Kishida said.

He also said he would work toward pushing the weighted average of the minimum hourly wage above 1,000 yen ($8.70) as soon as possible as part of his goal to redistribute economic benefits to a wider segment of the population.

In foreign affairs, Kishida touched upon the fact that 2022 marks the 50th anniversary of the normalization of relations with China and said he would seek to build a constructive and stable relationship.

With the ordinary Diet session scheduled to last until June 15 and an Upper House election planned for the summer, the Kishida government wants to avoid raising any issue or proposing any legislation that could be used to drum up support for the opposition.

For example, Kishida’s speech left out any mention of the various Go To consumption-promotion programs despite saying in his first speech as prime minister in December that he wanted to resume them as soon as possible.

The government has decided not to submit legislation to revise the Immigration Control and Refugee Recognition Law. Similar legislation never made it through last year’s ordinary Diet session in large part because the opposition wanted answers about the death of a Sri Lankan woman while being detained by immigration authorities.

The government is also not planning to submit legislation that would give the central and local governments greater authority to secure hospital beds needed to deal with COVID-19. Under the current law, the government can only ask for the cooperation of medical institutions.

Government sources said the initial plan for the legislation did not take the Omicron variant into consideration, and some officials said there was a need to revise the draft legislation.

The opposition was divided on what issues to focus on in the Diet.

The main opposition Constitutional Democratic Party of Japan has said it would question the government’s handling of the pandemic, including the apparent spread of the Omicron variant from U.S. military personnel based in Japan.

The CDP will press the government to revise the Japan-U.S. Status of Forces Agreement that has been criticized as handcuffing efforts to deal with COVID-19.

Nippon Ishin (Japan Innovation Party) will focus on Diet reform. One measure it will push is the elimination of the special allowance paid to the chairs of Diet standing and special committees.

(This article was compiled from reports by Keishi Nishimura, Yoshitaka Isobe and Tamiyuki Kihara.)