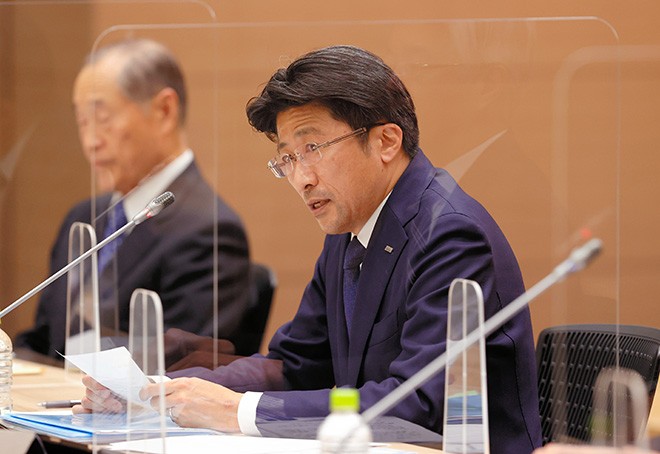 Masahiro Kihara, right, who will become the new president of Mizuho Financial Group Inc., at a news conference in Tokyo on Jan. 17. (Ryo Ikeda)

Mizuho Financial Group Inc. announced a new lineup of top executives as well as measures to restore public confidence after it was reprimanded by the nation’s financial regulator for a series of computer system failures over the past year that deeply tarnished the company’s credibility.

Masahiro Kihara, a senior executive officer, will be promoted to president of the group on Feb. 1, replacing Tatsufumi Sakai, who will step down to take responsibility for the glitches that affected countless customers.

“We are at a critical stage and determined to undertake a sweeping overhaul of our corporate culture,” Kihara said at a Jan. 17 news conference held after the company submitted a business improvement plan earlier in the day at the behest of the Financial Services Agency.

Seiji Imai, deputy president of the Mizuho Financial Group, will replace Yasuhiro Sato, as chairman of the group.

The Mizuho group said it will add more staff to its systems department by March, as well as create a setup to allocate more employees and financial resources on the basis of on-site conditions, to address issues in the future.

The group cut 60 percent of its computer systems-related personnel after its core system started full-fledged operations in 2019.

The FSA found fault with Mizuho’s savage reduction, saying it not only left the group without sufficient technical staff but indicated the company did not pay full attention to its systems operations.

During the news conference, Kihara acknowledged that the Mizuho group failed to grasp the significance of the personnel cuts at the time.

Kihara said that about 120 personnel were added to the systems department as of the end of December, compared with the workforce prior to when the glitches first emerged, and more will be assigned by March.

The Mizuho group has yet to get to fathom the root cause of the system failures.

Two more glitches followed even after the FSA reprimanded the group for a second time last November. The latest glitch occurred on Jan. 11.

Mizuho is the only one of Japan’s three megabanks that is experiencing system failures. That, many believe, is because the company encouraged a corporate culture that made employees exceptionally turf-conscious.

The FSA described the situation as one in which “employees do not say what they should and do only what they are told,” when it issued a business improvement order last year.

One episode that illustrates the idiosyncrasy of the group, according to a senior agency official, was when computer specialists working at a Mizuho subsidiary realized months before anyone else that the equipment that malfunctioned in September could go wrong.

But they did not point this out to their superiors.

Kihara, during the news conference, said it would be a formidable challenge to change the corporate culture. But he promised to improve in-house communications by establishing a forum where employees from the ground up can directly relay their input and opinions to top executives.

“We will start by welcoming constructive suggestions and actions by employees rather than deciding things in top-down fashion,” he said.

Some analysts said the legacy of the turf obsession dated from when Mizuho emerged after the merger of Dai-Ichi Kangyo Bank, Fuji Bank and the Industrial Bank of Japan in 2000.

“Some employees met with a backlash when they spoke out against colleagues from the other banks,” said one individual with close ties to the FSA. “It led to a culture where employees remained silent about things not directly related to them, and that attitude still lingers today.”

(This article was compiled from reports by Eisuke Eguchi and Kuniaki Nishio.)