How one fateful undergarment turned this Brit onto kimono 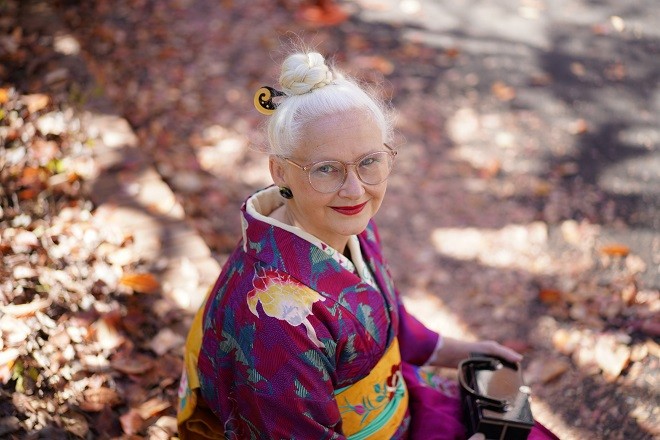 A native Briton spends nearly 365 days of the year wearing kimono, even though daily use of the traditional Japanese clothing is on the decline among modern Japanese fashionistas.

Sheila Cliffe, 60, teaches lessons on kimono culture at a university and is a popular Instagrammer who poses as a model in her online posts on kimono coordination.

Cliffe was 24 when she first visited Japan on a trip during a summer vacation while at university and had a fateful encounter with a long red “juban” at an antique fair. The piece of traditional Japanese clothing enthralled her with its brilliant red color and its silky, supple sheen.

Cliffe took even more interest in the piece when a friend told her it was an undergarment of sorts.

Eager to learn more about kimono, she made up her mind to come live in Japan.

Once she was in the country, Cliffe taught English, extensively researched kimono by reading books and visited kimono fabric shops where she asked question after question.

“Kimono was my teacher,” she said. “I studied Japanese to learn about kimono, and kimono taught me Japanese culture.”

The world of fashion had always been Cliffe’s passion. Born a twin, she was often mistaken for her sister in her early childhood because they were both made to wear matching clothes day after day.

“I am what I am,” she remembers thinking at the time.

She came to see fashion as a tool for self-expression.

Kimono became appealing to Cliffe partly because the patterns can be used to embody seasons and feelings, and also because they can be worn stylishly in many ways by devising combinations of an obi sash and a collar to go with them.

“What did women (of this country) wish to express with their kimono?” she came to ask herself.

Cliffe got married, had children and got divorced in Japan.

She had three children to raise and English classes to give, but she stayed up late at night and early in the morning to study the history of kimono fashion trends. She obtained a Ph.D., on the subject at the age of 52, nearly three decades after she first met that long undergarment.

She published a book based on her research results, titled “The Social Life of Kimono,” in English from Bloomsbury Publishing in 2017.

A stylebook she published in 2018 has been reprinted three times, and she issued “Sheila Kimono Style Plus,” a sequel to the stylebook, in November 2021.

Fewer and fewer people regularly wear kimono in Japan and the kimono industry is shrinking. Cliffe said she wants to make a breakthrough in reviving it.

“The making of kimono is closely related to the climate and other natural features,” she said. “Manufacturers are also enriched by their unique characteristics. A technique that is so distinctive, even by world standards, should be preserved in a live form.”

Cliffe presents portraits of herself to show stylish ways to wear kimono because she is eager to help expand the base of kimono wearers.

“Stashing kimono away is no different from what you would do at a museum,” she said. “Having them worn by young people as fashion items allows the culture to be passed down.”

Cliffe has mastered the theory and rules of kimono, and she follows the orthodox way of wearing it. But she believes that combining it with the latest fashion trends can make the experience even more unfettered and fun.

Her signature style is about combining brightly colored kimono with hats, big earrings or boots.

Cliffe believed that she was addressing audiences abroad, but she came to realize that Japanese people accounted for 80 percent of her followers on social media.

Cliffe’s online followers are largely those in their 20s through 40s.

“It’s not that young people are not interested in kimono,” she said. “It’s simply that the hurdles have become higher for them.”

The used kimono she purchased at auctions, antique fairs and elsewhere, often for only several thousands of yen (tens of dollars) apiece, account for roughly 90 percent of the 150 pieces in Cliffe’s possession.

“You can turn to YouTube to learn about the proper way of putting on a kimono,” she said. “You can begin with just having fun, and within the reach of your means.”

Cliffe has also been working on a “Kimono Closet” project, which is about uncovering old kimono stashed away in the closets of ordinary citizens. She and her colleagues have already opened the closets of some 50 individuals, and they are planning to organize the findings from their project in book format.

“Kimono are a treasure trove of information,” Cliffe said. “They are so appealing because they make you realize that there are connections.”

A single piece of cloth, for example, can give clues to the age and area of production, which allows one to feel connected to the manufacturers. A kimono handed down across generations provides a glimpse of its connections with the family.

“Such a viewpoint lies on the exact opposite end from fast fashion,” Cliffe said. “There are things in kimono that there cannot be with Western clothes.”

Cliffe plans to continue using her own personal style to pass on kimono culture to the next generation.